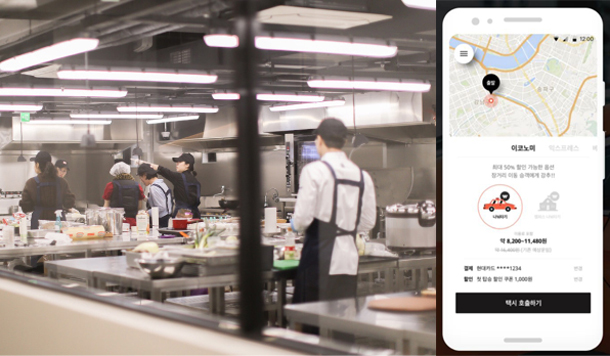 The government expressed its support for the sharing economy on Thursday by approving regulatory exemptions for two start-ups as part of its regulatory sandbox program.

For the next two years, people using taxi-sharing service Kornatus will be able to share taxis and split fares. Food and beverage (F&B) businesses will also be permitted to share kitchens.

The Ministry of Science and ICT said in a meeting Thursday it approved a request from taxi-sharing service Kornatus to allow its customers to use an application to share a taxi to their destinations and split costs.

Under current regulations, people in highly populated areas often struggled to catch cabs, especially at night. Kornatus will now be allowed to operate its taxi-sharing service in some parts of Seoul that are especially busy at night.

In a regulatory sandbox, normal rules and laws are held in abeyance to allow for the development of new technology or innovative services. The sandbox program has so far allowed dozens of new services to operate since it was launched in February this year.

With the approval valid for the next two years, Kornatus can allow two customers whose routes are similar to share a taxi by using its application between 10 p.m. and 4 a.m.

Until midnight, customers can use the application on their phone to hail a cab by paying 4,000 won ($3.40), while the price increases to 6,000 won after midnight. If two customers are within 1 kilometer (3,280 feet) of each other, a cab can make a slight change to its original route to pick up the additional passenger.

Kornatus, founded in June 2018, expects the approval to help people catch cabs more easily during the night and aid taxi drivers to make extra cash by carrying around more passengers.

The start-up said it will do its best to start the service within this month.

“We will work to resolve the difficulty of catching cabs in the nighttime while bringing innovation to the taxi industry that has been falling behind in recent years,” said Kornatus CEO Kim Gidong.

“We will do our best to help resolve the social conflict surrounding taxis.”

During the meeting, the Science Ministry also approved a request from the Simple Project Company to allow its partnering companies to share a single kitchen and sell their products on a business-to-business (B2B) basis.

WeCook’s business initiatives were up in the air until the approval, as existing regulation states that a kitchen is not to be shared among multiple registered F&B businesses on hygiene grounds.

With the approval, WeCook can have multiple partnering companies use its kitchen under the condition that the kitchen-sharing platform does its due diligence in maintaining hygiene levels in its facility.

The start-up is required to hire a hygiene specialist to conduct regular checks on the shared kitchen under the standards set by the Ministry of Food and Drug Safety. Food and beverages produced from the shared kitchen must also be labeled with expiration dates and ingredients.

WeCook believes the approval will signal a huge boost for Korea’s sharing economy and prompt more people to start F&B businesses with less burden. The start-up said its service can reduce financial burden for those looking to step into the F&B industry by up to 50 million won and contribute to the economy by creating jobs.

It is expected around 20 companies will register as businesses to share WeCook’s kitchen. As the Thursday approval is exclusively for Simple Project Company, other kitchen-sharing services in Korea are expected to make regulatory sandbox requests to the ministry in the near future.