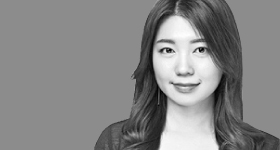 Upon drawing on it, a refreshing feeling of the sparkling drink filled my nose with the taste of cola. When the cola-flavored smoke penetrated my lungs, I smacked my lips to savor the leftover taste of cola once more. Wait, I hadn’t drunk cola: I’d inhaled it! That was my first experience vaping at Vape Korea Expo 2019.

The expo is the trade show for Korea’s domestic e-cigarette industry. The annual event was held for the second time at Kintex, Ilsan, Gyeonggi, for three days starting July 5. The organizer said that over 150 companies from 20 countries participated, presenting a wide array of e-cigarette-related products, ranging from batteries to cartridges. A number of different flavored liquids — like Papaya Mango, Blueberry and Cola — seduced visitors into taking a sip. Some booths even lured female visitors with sleek, miniature portable devices. By the time l left the expo, the entire ceiling of the venue was filled with hazy vapor, reflecting all the various excitements within.

Korea’s e-cigarette fever has grown exponentially since May 2017, when Philip Morris released IQOS, introducing a new series of heat-not-burn devices to Korean smokers. According to the Nielsen Cigarette Index, heat-not-burns accounted for 10 percent of the entire cigarette market for the first quarter, up 3.4 percent year on year. The actual sales volume also increased by 50.3 percent during the same period, offsetting the losses from the combustible cigarettes. The index reflects that heat-not-burns are gradually positioning themselves as a replacement for combustible cigarettes.

The trend is expected to grow even bigger after the release of Juul and Lil Vapor, the brand-new CSV (Closed System Vaporizer) type of liquid e-cigarettes. Following this trend, Nielsen is in the process of enlarging the scope of e-cigarette products to include vapor devices.

Contrary to the industry’s growth, the Korean government’s stance on e-cigarettes is conservative. As they contain nicotine, its regulation fairly aligns with that of combustible cigarettes. Overseas, Juul is sold with a nicotine content of 5 percent. Korea’s version has less than 1 percent due to domestic regulations that set nicotine content at a maximum of 2 percent. So Korea’s version of Juul is said to provide an insufficient feeling of “blow” that consumers say does not meet that of combustible cigarettes.

In addition, the government’s stance on whether the e-cigarette is less harmful than the combustible cigarettes is negative, which explains why there are no signs of easing regulations.

Despite the government’s hard-line stance, Korean smokers’ craze over e-cigarettes is unlikely to cool down any time soon. In the case of e-cigarettes, the Korean market is a great testbed as consumers are keen to try out new types of electronic devices. This is part of the reason why Juul was first released in Korea among other Asian countries.

The expo’s ultimate goal is to revitalize the e-cigarette industry amid regulations as 50 more companies from the wide spectrum sought business opportunities here in Korea compared to last year. While more and more liquor e-cigarette products, including Jouz, are waiting for release, whether e-cigarettes really can establish a firm ground in Korea’s cigarette market remains a question. Or will it end up just a fad due to government regulations?

(This opinion has nothing to do with the stance of Nielsen Korea.)