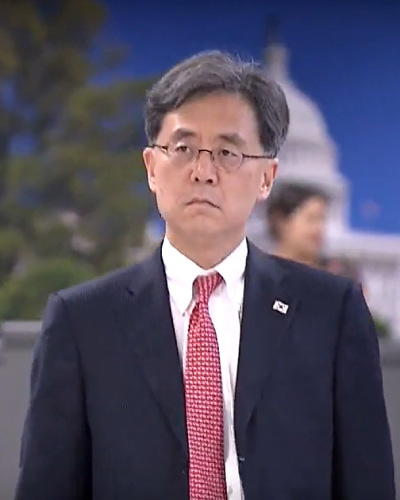 The Moon Jae-in administration has started a campaign to persuade the United States to mediate the escalated diplomatic row between Korea and Japan, particularly after Tokyo started restricting exports of key industrial materials.

Kim Hyun-chong, deputy national security adviser, made an unscheduled visit to Washington on Wednesday. “I came here because there are many issues between Korea and the United States to be discussed with members of the White House and Congress,” Kim told reporters as he arrived at the Dulles International Airport.

Asked if he will ask for U.S. intervention to end the trade row between Korea and Japan, Kim said, “Of course, I will discuss that issue, too.”

Starting July 1, Japan restricted exports to Korea of three materials used in semiconductors and displays, initially as a response to court rulings ordering compensation to Koreans forced to work in factories and mines in Japan during World War II. Tokyo insists that matter was settled with a 1965 pact.

Later last week, Japanese Prime Minister Shinzo Abe said the measure was taken because of a “trust” issue involving Korea not properly managing trade of strategic goods. Other politicians have gone as far as to suggest that Seoul may have violated sanctions on North Korea and that high-tech materials that can be used for military purposes may have ended up there.

President Moon met with Korea’s tycoons on Wednesday and promised that the government would work to find a diplomatic resolution.

Kim will meet with Deputy National Security Adviser Charles Kupperman to explain that Japan’s economic retaliation will disrupt the Korean economy and many other countries’ too. Kim will also offer objective grounds to refute Japan’s arguments that strategic materials ended up in North Korea due to Seoul’s poor supervision.

A senior Foreign Ministry official also arrived in Washington to have meetings with State Department officials.

Kim Hee-sang, director-general for Bilateral Economic Affairs, will meet with the State Department’s Acting Deputy Assistant Secretary for International Finance and Development Roland de Marcellus. Their meeting is meant to prepare for the fourth Senior Economic Dialogue, and the two sides will discuss bilateral economic cooperation.

Upon his arrival in Washington, Kim said he will explain Korea’s stance to his U.S. counterparts. “I will point out one by one the problems associated with Japan’s tightened export restrictions, because it is an act that disturbs the international trade order,” he said. “Because Knapper is in charge of economic relations between Korea and U.S., I will explain to him that Japan’s measures are hurtful to not only Korea but also U.S. industry.”

“Korean companies produce over 70 percent of DRAM [Dynamic random-access memory] chips in the world market,” Kim said. “If our semiconductor supply is disrupted, American companies that need chips will also experience disruption in their production. Companies that are exporting semiconductor manufacturing equipment to Korean firms will also be hit in a chain reaction.”

“We are all involved in a global value chain,” Kim said. “I will make clear that the world must cooperate [to make Japan] withdraw a measure that disturbs this global trade order.”

Kim flatly rejected Japan’s arguments that some of its exports ended up in North Korea. “We did an urgent primary inspection, and the argument is completely groundless,” he said. “Japan is making an absurd argument, because it has no substantial grounds to back its restrictions. It is unacceptable for Tokyo to tighten export restrictions based on such an unfounded basis.”

Foreign Minister Kang Kyung-wha had a telephone conversation with her U.S. counterpart, Secretary of State Mike Pompeo, on Wednesday night. They mainly talked about the trade row, not their usual topics of the denuclearization of North Korea or the U.S.-Korea alliance.

“Kang stressed to Pompeo that the Korean government has maintained a two-track approach [of dealing with a history issue separately from other issues] to advance a future-oriented Korea-Japan relationship,” the ministry said Thursday in a press release. “She also explained that Japan’s export restrictions not only affect Korean companies but also would disrupt global supply networks, impacting negatively on American companies and the global trade order. She expressed concerns that Japan’s action is undesirable for relations between Korea and Japan, as well as trilateral cooperation among Korea, Japan and the United States.”

The ministry said Kang told Pompeo that Seoul wants Tokyo to withdraw the latest measure and stop aggravating the situation. “Korea wants to put efforts into finding a diplomatic resolution through dialogue with Japan,” she told Pompeo, the ministry said.

The phone talks took place while Kang was in Addis Ababa, Ethiopia. According to ministry sources, the ministry had been trying to arrange the phone conversation ever since Japan announced the measure on July 1. The earliest time Pompeo was available was only after Kang departed on her trip.

The phone call took place for 15 minutes from 11:45 p.m. on Wednesday Korean time. Although her schedule was full, including a meeting with Ethiopian President Sahle-Work Zewde, the phone call was her priority for the day, sources said.

The Foreign Ministry also issued a press release about their talk at 2:01 a.m. on Thursday, in an attempt to dismiss concerns that Seoul and Washington are not communicating about Tokyo’s latest measure.

Pompeo, however, gave a lukewarm response. According to the ministry, he only stated his understanding of the situation, rather than expressing any agreement or support.

The ministry said Kang and Pompeo agreed to cooperate to strengthen dialogue through diplomatic channels between Seoul and Washington and among Seoul, Washington and Tokyo. While the Foreign Ministry placed the press release on the Kang-Pompeo talks in a prominent position on its Internet site, the U.S. State Department did not issue any press release.

The government will continue pursuing Washington’s support. David Stilwell, the newly appointed assistant secretary of state for East Asian and Pacific Affairs, is currently making his first trip to the region.

From Thursday till Sunday, Stilwell was scheduled meet with senior officials in Japan, his first destination on the tour. He will have a two-day trip to Manila on Monday and Tuesday and arrive here Wednesday. “Stilwell will continue his consultations in Seoul, meeting with top Ministry of Foreign Affairs and Blue House officials to discuss further strengthening the alliance,” the State Department said.

Kang cut short her Africa trip to return to Korea Tuesday to meet with Stilwell.