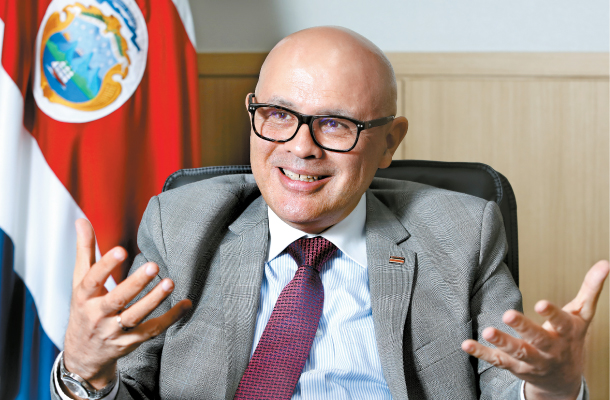 Rodolfo Solano Quiros, former ambassador of Costa Rica to Korea, speaks to the Korea JoongAng Daily at the Embassy of Costa Rica in central Seoul last month, a few days before he completed his four-year tenure. [PARK SANG-MOON]

While it is rare, some diplomats are assigned to the same country twice.

But by the time Rodolfo Solano Quiros was posted to Korea as the ambassador of Costa Rica, it was, in fact, his fourth time living in the country after his very first stay during the Asian financial crisis.

“Life gave me opportunities to witness some of the chapters of modern history of Korea,” Solano Quiros told the Korea JoongAng Daily in the last week of June, a few days before the end of his four-year tenure. “1998 was the first time I was in Korea, during the IMF [International Monetary Fund] crisis. I was a student at the time.

“I call that time a period of sadness in Korea because it came after Korea experienced a huge economic momentum as one of the seven Asian tigers,” he said. “I recall seeing people line up in front of the agricultural bank to give up their gold rings and necklaces, family heirlooms, to support the country to pay back their debts.”

Solano Quiros returned to the country in 2000 as a participant of a program at Korea International Cooperation Agency, this time witnessing the first inter-Korean summit.

“I was at the City Hall of Seoul, where the summit was screened live, and I saw former President Kim Dae-jung walking in a slow gait toward [former] North Korean leader Kim Jong-il and shaking hands,” said the ambassador. “People around me watching the screen were crying. And family reunions followed after that. I call that time a period of hope in Korea.”

Then, as a diplomat, he was back in the country in 2002, in time for the World Cup, which Korea was a host of and made the semifinals to. Solano Quiros was the minister counselor and consul general of Costa Rica to Korea from 2002 to 2010.

“There was this happy vibe everywhere, and to me it seemed like the crown of internationalization of Korea, because in areas like Itaewon, it felt like Babel Tower of sorts, you could hear so many different languages,” he said. “I call that a moment of happiness of Korea.”

His posting as the ambassador in Korea began in August 2015. In just over a year, he witnessed the weekly candlelight vigils in Gwanghwamun Square, central Seoul.

“I am talking about seeing one million people in Gwanghwamun Square, families altogether including the grandmothers, mothers and daughters and sons, and that showed that Korea understands what democracy is,” Solano Quiros said. “That was a moment of strength for the Korean people. What I’m trying to say is that I had a chance to be here to see moments of sadness, hope, happiness and strength.”

Wrapping up his most recent stay in Korea, the ambassador of Costa Rica sat down with the Korea JoongAng Daily to discuss highlights in the bilateral relations, including the signing of the Korea-Central America free trade agreement (FTA) and cooperation on environmental conservation and sustainable tourism. The following are edited excerpts of the interview.

Q. Costa Rica ratified the FTA it signed with Korea in February 2018, becoming the second Central American country to enter into the agreement. Korea has yet to ratify it. What should we expect in terms of visible changes in trade once both countries have ratified the agreement?

A. We understand that the FTA is waiting to be ratified by the National Assembly in Korea by the end of the year. To give you an idea of where the bilateral trade and investment relations stand today, the level of bilateral trade last year was around $500 million. In the investment sector, Korea in December last year decided to enter the Central American Bank for Economic Integration, becoming the second-largest member of the bank.

The FTA between Central American countries and Korea is a modern-style FTA, which means that it is not only an FTA that takes note of tariffs and such but one that also promotes innovation and cooperation among SMEs, as well as on relatively new sectors like the biomedicine and organic food.

Entering into a trade agreement with Costa Rica opens doors to the region as we have signed 62 FTAs, and it would be easy for Korean companies to use Costa Rica as a platform to enter the market of 15 countries in the Caribbean.

How has bilateral trade in coffee evolved during your tenure?

Our coffee exports to Korea have increased by more than 300 percent in the past five years. We have eight regions in Costa Rica that produce coffee, among which the most well known is the Arabica. Around 90 percent of the production of coffee in Costa Rica belongs to a social economy system, which means that they are produced in cooperatives. For instance, one coffee company from Tarrazu is a cooperative of 2,500 families. Currently, we’re working with Korea on using coffee in the pharmaceutical sector for its known benefits as an antioxidant.

In our region, we have an integration system called SICA [Central American Integration System] in which eight countries are members: Belize, Costa Rica, El Salvador, Guatemala, Honduras, Nicaragua, Panama and the Dominican Republic.

President Moon Jae-in will be visiting Latin America in November for Asia-Pacific Economic Cooperation summit, and this can be an interesting possibility. Both countries are looking forward to 2022, during which we will celebrate 60 years of relations.

Costa Rica’s reforestation records are well known. A wildfire in Gangwon in April ravaged through hectares of forests. Is there any cooperation planned on reforestation?

Both countries have strong experiences regarding reforestation. Our minister of forestry will be visiting Korea in July. Forestry is not only about protection and conservation but also about how to use natural resources in the most responsible manner.

In that sense, we have been arranging visits by members of local governments of Korea to Costa Rica, not to teach them anything, [as] we don’t teach - we share knowledge. The first trip was arranged in 2017 and it was attended by 17 members of local governments. Last year, it was attended by 21, and this year, around 60 members will attend. They will be looking into renewable energy, forestry and sustainable tourism in Costa Rica.

We have been focusing on getting the people involved and interested in conserving nature. About 30 percent of the national territory of Costa Rica is national parks. The more the people see these protected areas in proximity, the more they would care about protecting these areas.

Costa Rica plans to be a zero-emissions economy by 2050. How feasible is that plan?

Some people say we are dreaming, but there is a saying that goes, one who cannot dream cannot smile. So we prefer to dream, and we think we can achieve this goal. The generation of my grandfather and father abolished the Army 71 years ago, and that was a gift they gave to my generation. What can we give to our next generation? A decarbonized economy. What this means is that we have to ban fuel based on fossil fuels and discover new sources of energy. Costa Rica today is a natural hub for electric vehicles, and we are building an electric train that will run 100 percent on renewable energy.

This is a project being planned and implemented by the first lady. The electric train will cover 700 kilometers [435 miles] and touch 14 different cities, and the idea is that these cities will be developed as smart cities.

Are there any bilateral projects on biodiversity and the R&D sector?

Costa Rica is home to 6 percent of the world’s diversity, counting only the species in the mainland - we don’t know how much more we have in the ocean. In the future, medicine will be developed from the ocean. I think it is good timing for Korea and Costa Rica to expand cooperation in this area as Korea is a leader in the R&D sector.

We have ongoing projects with the Global Green Growth Institute, Green Climate Fund and Green Technology Center (GTC) in Korea. With GTC, we began a project about obtaining energy from the ocean - such as catching solar energy through the reflection of sunlight in the water - and what we call blue smart farming, or smart farming, and cultivation of resources from the ocean.