Xin Xin is 1st Asian to win in open water

Xin Xin is 1st Asian to win in open water 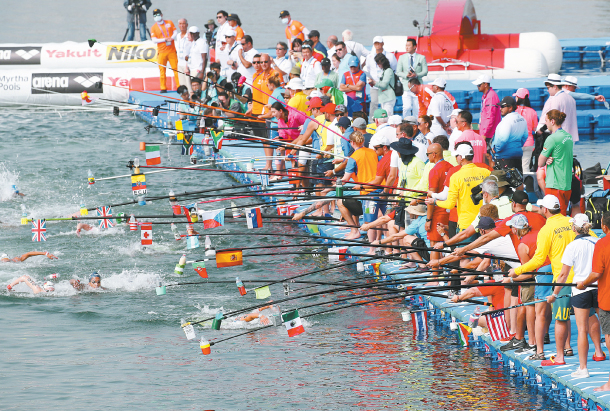 Coaching staff hold out water bottles on rods at the half way point of the women’s 10 kilometer open water swimming at the 18th FINA World Aquatics Championship Gwangju 2019 at Yeosu Expo Ocean Park on Sunday. [YONHAP]

Having started the race toward the back of the group, Xin slowly made her way up the leaderboard for a thrilling victory, finishing in first with a time of 1 hour 54 minutes and 47.20 seconds.

This is Xin’s first gold at the world championships. Not only was this her first gold, this is also a historic achievement as she became the first Asian swimmer to ever win a medal in open swimming.

Xin got off to a slow start, reaching the first split 55th out of 64 racers with a time of 7 minutes and 53.6 seconds. Having gotten herself up to 24th in the field by the 14th split, Xin started to speed up once she reached the 15th split, good enough to be ranked fifth with a time of 1 hour 37 minutes and 11.3 seconds. 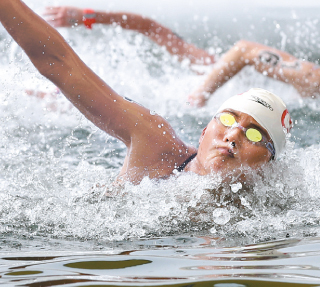 Then, Xin excelled in the final split of the race to finish a slim 0.9 seconds ahead of runner-up Haley Anderson of the United States.

“I am really excited for my first place today,” Xin told FINA. “My goal before this competition was to qualify for the Olympics. I believe that I can race better and better in the future. My strategy today was to relax and save energy in the first half, and to keep ‘clear in the mind’ and also to keep the confidence in myself.”

A gold medal finish is a great achievement for Xin. Back at the 2017 World Championships in Budapest, Xin finished 17th in the same event. By winning gold, Xin has automatically qualified for the 2020 Tokyo Olympics. At the 2016 Games in Rio, Xin just missed out on the podium by finishing fourth in the women’s 10 kilometer open water.

Although her gold is China’s fourth in the competition, she is the first Chinese athlete to win gold outside of a diving competition.

“To get my hand on the touch pads in second is really awesome,” Anderson told FINA. “I finally won a medal in the 10 kilometer at the world championships. I really learned a lot during the past two quads.”

Although Bruni won silver in the women’s 10 kilometer open water during the 2016 Rio Olympics, this was her first-ever medal won at the world championships.

“This was my first medal in the world championships,” Bruni told FINA. “I tried so hard in the final moments of the race because there were 10 or 15 swimmers arriving at the touch pad at same time. For me today’s results are very important as I qualified for the Tokyo Olympics. My target is always to win a gold medal and that is the goal for Tokyo.”

Aurelie Muller of France failed to defend her title for a third time at the world championships by finishing 11th, clocking 1 hour 54 minutes and 51.2 seconds.

There are a total of seven medal races competed in open water, the only sport that is being competed in Yeosu, South Jeolla.