Israel’s leader drops by to test-drive a Hyundai

Israel’s leader drops by to test-drive a Hyundai 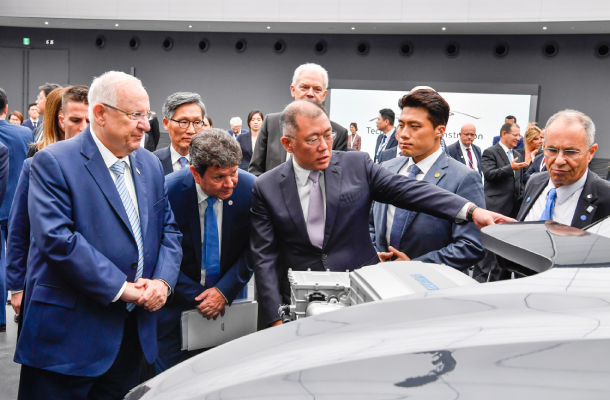 The visit came after the Israeli president met with President Moon Jae-in earlier in the morning.

“I have been looking forward to this visit. The future of automotive industry is in automation, safety and innovation,” Rivlin said.

At the Hyundai Kia R&D Center in Namyang, Rivlin test-drove a Nexo fuel-cell vehicle equipped with Level 4 self-driving capability. No human interaction is required for Level 4 vehicles under the standards set by the SAE International, formerly known as the Society of Automotive Engineers.

“I know that you have already developed partnerships with some Israeli start-ups […] and I hope that this is just the start. I look forward to expanding our cooperation,” Rivlin said.

Chung said the group is already planning to expand investments in Israeli start-ups in various fields.

Last month, the group decided to invest in Israeli start-up MDGo, which is focused on health analysis through AI.