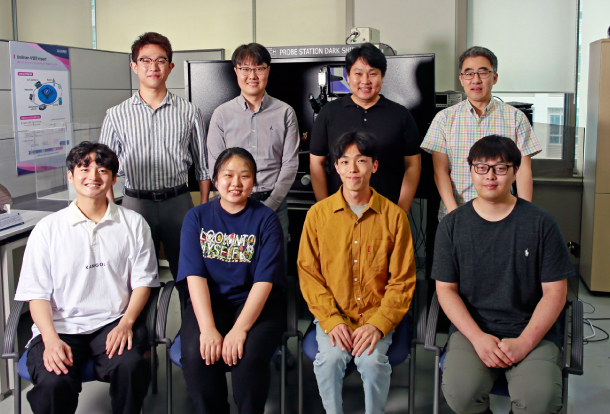 Kim Kyung-rok, a professor in the department of electrical engineering at the Ulsan National Institute of Science and Technology, second from right in the top row, poses with his team. [SAMSUNG ELECTRONICS]

A group of Korean researchers succeeded in developing a ternary logic system for semiconductor production that actually works on a wafer, according to Samsung Electronics on Wednesday. The technology will result in smaller chips with much faster processing speeds and lower electricity consumption - in as short a time as five years.

So far, semiconductors have been based on binary logic systems. The biggest promise of the newly developed ternary system lies in faster processing speeds.

The team was led by Kim Kyung-rok, a professor in the department of electrical engineering at the Ulsan National Institute of Science and Technology, based in Ulsan. Its research results were published in Nature Electronics under the title, “Tunneling-based ternary metal-oxide-semiconductor technology,” on Monday in London.

“Chips based on a ternary logic system have high calculation speed, consume less power and could contribute to scaling down the physical chip scale,” said Samsung Electronics in a release Wednesday.

Samsung Electronics has been behind this research since September 2017, and it was included in hundreds of projects meant to foster new businesses for the future. Samsung earmarked a fund of 1.5 trillion won ($1.27 billion) in 2013 to promote scientific research deemed necessary for the country’s future industrial needs over the coming decade. Ever since, the tech behemoth has spent 682.6 billion won from the fund on 532 projects.

“We will spearhead a paradigm shift in overall elements of future semiconductors - from memory to processing, cells and design - with the ternary logic system,” Kim was quoted as saying by Samsung. “The ternary system will cause an enormous ripple effect in artificial intelligence [AI], autonomous driving, Internet of Things [IoT], bio chips and robots.”

Global semiconductor producers are in heated competition to come up with high-performance chips suited for AI, autonomous driving and IoT.