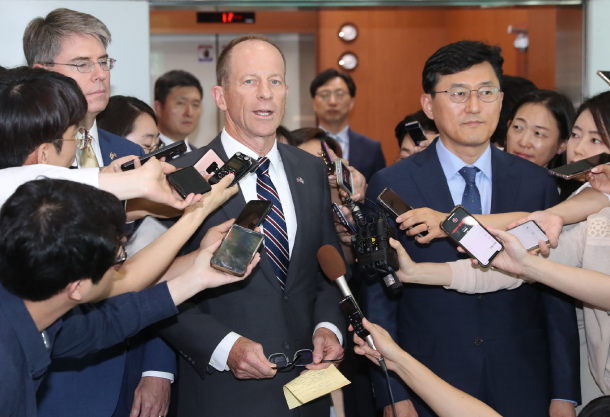 David Stilwell, the new U.S. assistant secretary of state for East Asian and Pacific affairs, said Wednesday that Korea and Japan “must resolve” their diplomatic row soon and that the United States will do whatever it can to help.

“The U.S. places great priority on strengthening relations between our country and our two close allies, between the ROK [Republic of Korea] and Japan,” Stilwell told reporters at the Ministry of Foreign Affairs in central Seoul after the meetings.

“Fundamentally, the ROK and Japan must resolve these sensitive matters, and we hope that resolution happens soon,” he continued. “The United States, as a close friend and an ally to both, will do what it can to support their efforts to resolve [such issues].”

Japan unilaterally imposed restrictions on exports to Korea of three key materials used in semiconductors and displays on July 4 and has warned further restrictions are coming. Seoul has been calling on Tokyo to withdraw the restrictions, which it considers retaliation for Korea’s Supreme Court ordering Japanese companies to pay compensation to Korean victims of forced labor during World War II.

Noting a “great focus” on tensions between Korea and Japan at the moment, Stilwell said he appreciates Korean officials “sharing their views on the matter, which I do take very seriously.” He added he can “take those messages home faithfully.”

Stilwell also noted, “The truth is, no significant issue in this region can be resolved without cooperation between our two allies, Korea and Japan,” possibly alluding to North Korean denuclearization.

Stilwell added that he discussed with Seoul officials how to “strengthen an already rock-solid ROK-U.S. alliance,” and also discussed a “natural convergence” between the U.S. Indo-Pacific Strategy and the Moon Jae-in administration’s New Southern Policy and “take advantage of the overlaps and opportunities that they present.” The Moon administration’s New Southern Policy is a vision of cooperation with Association of Southeast Asian Nations (Asean) and India.

Earlier, Stilwell held talks with his Korean counterpart, Yoon Soon-gu, the deputy minister for political affairs at the Foreign Ministry, and Lee Do-hoon, the special representative for Korean Peninsula peace and security affairs.

Stilwell, who served in the Air Force for 35 years, arrived in Korea Tuesday for a three-day visit, following stops in Japan and the Philippines in his first trip to the region since assuming his current post, which also takes him to Thailand.

The Korean Foreign Ministry in a statement said, “Regarding the Japanese government’s unilateral export restrictions, Deputy Minister Yoon expressed concern that Japan is not responding to our proposal to come up with a resolution to the issue through dialogue and taking unilateral measures not helpful to the situation, and requested the United States to play any role it can for a speedy resolution to the problem.”

Stilwell, according to the ministry, said that the United States “understands very well the seriousness of the problem” and that Korea-Japan cooperation plays an “important role in peace, security and prosperity in the Northeast Asia region,” adding it will play what role it can as an ally in supporting efforts to resolve the issue.

NSO’s Kim made a surprise visit to Washington last week, and in his meeting with Stilwell again emphasized Korea’s stance about Japan’s economic retaliatory measures. He held the meeting with Stilwell at the Foreign Ministry complex despite senior Blue House officials usually holding meetings at the Blue House. Kim, a former trade minister, also previously served as an ambassador to the United Nations and on the World Trade Organization’s (WTO) Appellate Body.

Korea will also raise the issue of Japan’s export restrictions at a WTO General Council meeting scheduled for next week in Geneva after it was included on the agenda.

A Korean government official told foreign reporters in Seoul that Korea preferred to settle the issue “amicably through dialogue” and “maintain solidarity among Korea, the United States and Japan in light of numerous challenges we face in the region.”

This official, speaking at the Seoul Foreign Correspondents’ Club Wednesday, said Seoul has relayed to Washington the “detrimental effect” the escalation of economic issue between Korea and Japan would have on trilateral cooperation with the United States.

He also warned that “the global value chain will crumble” with the violation of WTO regulations.

“Restricting exports of materials, whether it be chemicals or rare earth [minerals], is inconsistent with WTO principles,” said this official. “Without any prior notice, Japan decided to restrict exports of the chemical products needed to manufacture semiconductors,” he added, warning there could be “dire consequences.”

He pointed out that in a report earlier this year by the Institute for Science and International Society, Korea ranked 17th and Japan 36th in terms of national strategic trade controls.

The official emphasized the importance of the doctrine of the separation of powers and said, “Korea, as a democratic nation, can’t ignore nor discard the Supreme Court ruling that the 1965 agreement didn’t cover crimes against humanity and human rights violations against forced laborers.”