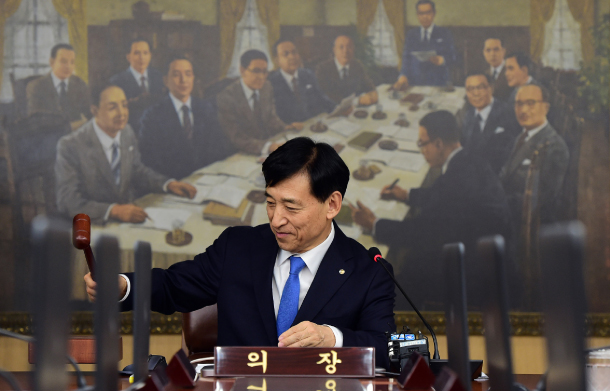 Bank of Korea (BOK) Gov. Lee Ju-yeol convenes a meeting at the BOK in central Seoul on Thursday. [NEWS1]

The central bank lowered its key interest rate Thursday in a surprise move as the economy faces ever gloomier tidings, including Japan’s restrictions on exports to Korea.

In a monetary policy meeting, the Bank of Korea (BOK) trimmed its benchmark interest rate from 1.75 percent to 1.5 percent, the first rate cut since June 2016.

There was only one dissenting vote from Lee Il-houng, a board member who advocated holding the benchmark rate steady.

The market was betting on a cut in August, but intensifying problems both at home and abroad - including export restrictions from Japan and the trade dispute between the United States and China - prompted the BOK to move.

“With weaker-than-expected economic growth and lower inflationary pressure, there has been a growing need to support economic recovery” said BOK Gov. Lee Ju-yeol.

The governor cited the recent trade restrictions by Japan as a factor determining the cut, adding that the impact won’t be negligible on the economy, particularly if the restrictions widen.

“Considering the trade size of Japan and Korea and industrial linkages between the two countries, the impact won’t be small,” Lee said. 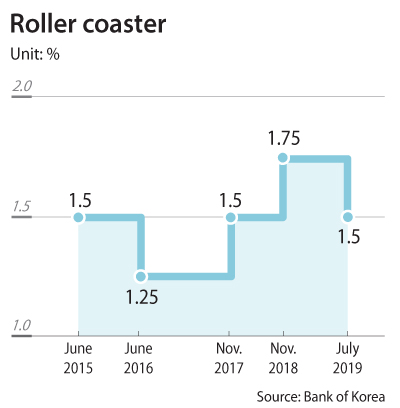 The central bank also slashed its 2019 growth outlook by 0.3 percentage points from 2.5 percent to 2.2 percent. The BOK revised down the country’s potential growth rate from a range of 2.8 percent to 2.9 percent.

A country’s potential growth rate is the maximum possible rate an economy can grow without triggering inflation.

This year’s inflation rate projection was also adjusted to 0.7 percent from the previous 1.1 percent, affected by persistently low consumer prices.

The governor blamed weaker-than-expected exports and investments as the primary reasons for the adjustments.

The country’s exports in June were $44.2 billion, a 13.5-percent decline from a year earlier and the largest drop since January 2016, when exports fell 19.6 percent.

In another indicator of the weakness of the economy, the central bank revised economic growth for the first quarter to its lowest level in a decade, raising worries that the slump is deepening.

Despite the unexpected cut in the interest rate, the stock markets were in negative terrain as market uncertainties outweighed any expectations for the effects of a rate cut.

“Despite the earlier-than-expected cut of the benchmark interest rate, the markets were more affected by the worries surrounding Japan’s move to remove Korea from its ‘white list’ and the stalled negotiations between the United States and China over trade,” said Noh Dong-kil, an analyst at NH Investment & Securities.

“The market reaction is limited because a planned rate cut in the United States is a more of a pre-emptive measure [to prevent an economic downturn],” he said, “while the BOK was forced to cut because of weakening economic indicators.”

Bonds rallied after the announcement, which prompted some analysts to project another rate cut this year.

With the interest rate cut, the BOK is joining other major economies that have either prepared or exercised rate cuts.

Entering this year, central banks in Australia and India pushed down interest rates and the U.S. Fed and European Central Bank are moving toward monetary policy easing with the Fed almost guaranteed to cut its benchmark rate later this month.

Now the market is trying to anticipate the BOK’s next action.

Kong Dong-rak, an economist at Daishin Securities, expects one more cut in the fourth quarter.

“We expect the next rate cut to come earlier than expected as the economic outlook and inflation saw a major downward revision,” Kong said, shifting the time frame for the move from next year’s first quarter to the fourth quarter.

That view was echoed by Morgan Stanley.

“We expect the BOK to pause at the August meeting, given the one dissenting vote today. However, we expect another 25 basis points cut in the fourth quarter of 2019,” it said in a statement.