Last December, everyone was in for a bit of a surprise when a government survey found that Korean elementary school students nationwide picked YouTuber as their fifth most-desired career choice.

But given the massive success of many young YouTubers, it was perhaps only a matter of time before the career option would win over the hearts of children - and their parents.

With 16.8 million subscribers, the single most-followed independent YouTube channel in Korea is Boram Tube Vlog, according to YouTube tracker WatchinToday. The channel, which features 6-year-old Boram going about her daily life and playing with family and friends, is estimated to earn between 250 million won ($211,160) and 3.45 billion won a month. Boram is also the protagonist of the country’s second most-subscribed independent channel - Boram Tube ToysReview. SeoeunStory, which features 5-year-old Seoeun, and Awesome Haeun, starring a 10-year-old dance prodigy, all land in the top 11 independent channels in Korea based on subscription numbers.

The dominance of young YouTubers has propelled private institutions and even some schools to offer students and parents classes on how to build their own YouTube channels. A quick search online shows there are at least four books - two of them written by popular adult YouTubers with young audiences - that guide children on how to become a YouTube star.

An overnight YouTube camp for youth is even set to open next month.

“Around 10 YouTubers will be invited to teach children how to film, edit and upload videos,” said Kim Yong-deok, a member of the newly-launched YouTube Training School, which is organizing the camp. “We’ll also talk about how to create YouTube accounts and discuss as a group what kind of channels they want to run.” 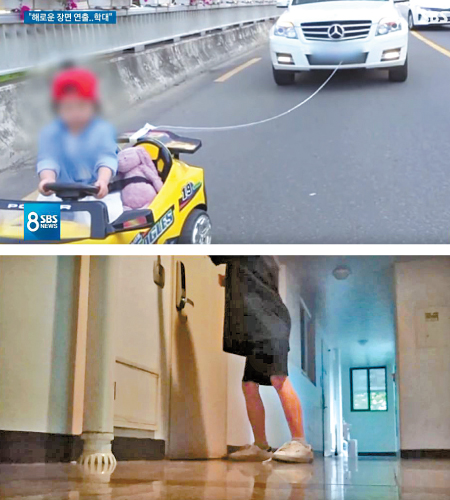 Top: Operators of a channel that uploaded a video of a child driving a toy car on the road were reported to the police by Save the Children. Above: Some kids carry out disruptive activities like running away after ringing a stranger’s doorbell to attract more views. [SBS, SCREEN CAPTURE]

Getting extreme for views

As is often the case with media involving children, YouTube channels featuring minors have faced many controversies.

While most young YouTubers post videos of themselves engaged in inoffensive and age-appropriate behavior such as playing with toys or eating snacks, some children have faced criticism for carrying out disruptive, even illegal, activities to attract views on their channel. For example, when police in Seongbuk District, central Seoul, fined 11 adolescents last month for wrecking property as they fled from strangers’ homes after ringing their doorbells, they cited the popularity of videos promoting similar activities online. A since-deleted video uploaded by an elementary school student featured him pretending to smoke in public to provoke agitated responses from older pedestrians.

Some of the children’s own guardians have also been accused of jeopardizing the well-being of young YouTubers to produce click-worthy videos. Parents often work behind the scenes to plan and operate their child’s channels.

In 2017, Save the Children’s local office deemed the behavior of some parents so problematic that it took matters to court. The nonprofit organization reported the operators of two YouTube channels to police for child abuse - one had uploaded a video of a man making his young daughter cry by threatening to kidnap her mother while disguised as a burglar, and another had posted a video of a 5-year-old driving a toy car in the middle of a busy road.

“There were elements in the videos that we assessed would be harmful to not only the moral judgement and development of the children starring in the channels, but the children who watch them as well,” explained Koh Woo-hyun, an official at Save the Children Korea’s advocacy department. The Seoul Family Court had since ruled that the operators of the channel featuring the toy car were guilty of child abuse and ordered them to receive professional counseling, while the other channel was let off due to lack of evidence.

Last month, the video sharing giant introduced sweeping changes that restrict the activity of channels featuring children younger than 13 in an effort to make the platform more kid-friendly. YouTube now prevents live streams of children without the accompaniment of an adult and disables the comment sections of videos featuring younger minors.

“With this update, we’ll be able to better identify videos that may put minors at risk and apply our protections,” reads a statement from the company’s blog. “YouTube has never been for kids under 13,” the statement continues, adding that the stand-alone YouTube Kids app the company launched back in 2015 offers a more child-friendly alternative.

According to a recent article by the Wall Street Journal, YouTube may even be considering moving all children’s content to the YouTube Kids app. But given that children’s channels are some of the most popular and profitable on the main platform, the move - if it ever goes through - is expected to face ample resistance from young star YouTubers and their families.

As for the new YouTube policies rolled out last month, experts commend the platform for moving in the right direction but argue that the changes don’t address the core of the problem.

“I understand the reasoning behind YouTube applying these protective measures,” said Kim Hee-jin, a lawyer at the International Child Rights Center. “But it’s not like we can guarantee that the children will be completely safe from harm just because they’re accompanied by adults during livestreams […] freedom of expression is a basic right and restricting accessibility to YouTube, one of today’s most universal tools of self-expression, solely based on age is not the correct approach to the problem.”

“Comments are a very important tool for communication,” Kim Yong-deok of YouTube Training School said. “I think it’s reasonable to stop livestreams but I think young YouTubers under the guidance of their parents should have a choice whether to disable comments for videos.”

“Although I did worry before that negative comments would hurt my child, it was a bit unfortunate to see a lot of positive comments get deleted as well,” said the mother of “latte girl,” a 10-year-old Korean girl who practices speaking English through her vlogs.

Given YouTube’s undeniable presence in children’s lives today, many experts are calling for measures that can monitor harmful elements and encourage children to create constructive content rather than simply limiting their access to the platform.

“We have to let kids know that they can’t become a YouTuber just by watching a lot of videos,” said Kwon Jang-hee, director of Norimedia, an organization that specializes in preventing internet addiction among children. “They have to lead a well-balanced and creative life in order to be able to produce high quality content […] I think YouTube should keep a watch out for whether children are being used as a money-making instrument by parents.”

“The internet helps children find their identities and opens up a lot of opportunities to find answers to questions and even future career paths,” said Koh from Save the Children Korea. “We need to create an environment where children will be safe if they come across harm instead of restricting their access.”