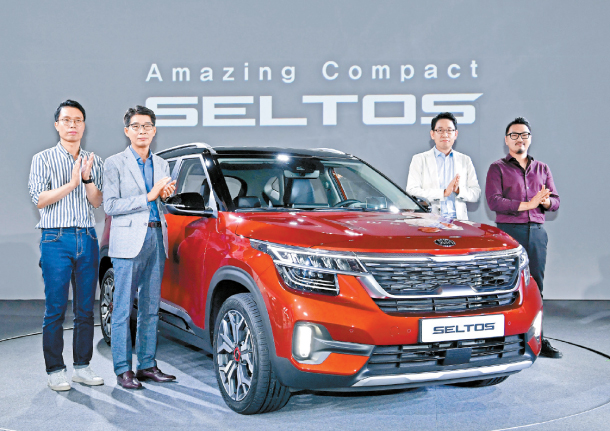 The compact SUV is seeking to upstage Kia’s previous attempt in the segment, the smaller Stonic SUV, as it packs a more powerful engine and premium features.

The vehicle is the largest in its segment for the domestic market, coming in at 210 millimeters (8.3 inches) longer than sister company Hyundai Motor’s comparable Kona SUV. The Seltos is around 100 millimeters shorter than Kia’s larger Sportage SUV.

The Seltos is targeting young and new drivers, and will come with smart safety features including forward collision-avoidance assist, lane-following assist and driver-attention warning as standard.

It also features interior ambient lighting and a heads-up display.

“Seltos will play a game-changing role in the fierce small SUV market through its design and features,” said Kwon Hyug-ho, executive vice president at Kia Motors at Seltos’ launch event in Yeoju, Gyeonggi.

The automaker will also target global markets with the Seltos as the vehicle is the latest in a crowded segment. The Seltos brings Kia’s total number of SUVs and crossovers to seven in the domestic market.

Kia said it will launch the Seltos in India and China in the near future, without specifying exact dates.