No sides for U.S. in trade row

No sides for U.S. in trade row 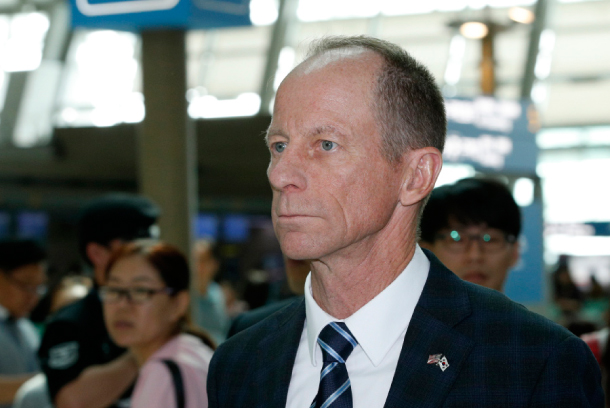 The United States takes the tensions between Korea and Japan very seriously but cannot play a “mediating role,” according to the chair of the Korean National Assembly’s Foreign Affairs Committee who said the message was relayed to him by the U.S. State Department point man for East Asian affairs.

Yoon told the JoongAng Ilbo over the phone that Stilwell told him that the United States “could not take one side or the other because taking one side means losing the other.”

Stilwell then conveyed, according to Yoon, that Washington “encouraged its two friends,” Seoul and Tokyo, “to resolve the issue through dialogue.”

Stilwell was on a three-day visit to Seoul since Tuesday, which followed stops in Tokyo and Manila. He departed for Bangkok Thursday.

Following a series of meetings with senior Blue House and Foreign Ministry officials Wednesday, Stilwell told reporters the United States, by “virtue” of its alliance with Korea, “will engage in all issues dealing with U.S. and Korea.”

Stilwell also said the United States, “as a close friend and an ally” to both Korea and Japan, “will do what it can to support their efforts to resolve” the issue soon.

However, Yoon said that Stilwell’s position is fundamentally the same as that of U.S. Ambassador to Seoul Harry Harris, who said last week “now is not the time” for Washington to mediate, and added that “Korea and Japan need room to resolve the issue.”

Yoon said it was but a “difference in expression” between Harris, who was speaking as an ambassador and diplomat, and Stilwell, but that the two shared the same stance on the Korea-Japan row.

Some analysts, however, view “encourage” and “engage” as interchangeable in diplomatic language and that Washington conveyed it will play some role to keep Seoul-Tokyo tensions from escalating further.

Should relations between Seoul and Tokyo further deteriorate or be drawn out for an extended period of time, this could also interfere with Washington’s strategic interests and economy as well.

The U.S. House of Representatives’ Committee on Foreign Affairs on Wednesday passed a resolution “on the importance and vitality of the United States alliances with Japan and the Republic of Korea, and our trilateral cooperation in the pursuit of shared interests.” Republic of Korea is South Korea’s official name.

Democratic Rep. Eliot Engel of New York, chairman of the House Foreign Affairs Committee, first introduced the resolution in February. A similar resolution was passed by the U.S. Senate in April.

The House resolution notes that the three countries “share a commitment to free and open markets, high standards for the free flow of commerce and trade, and the establishment of an inclusive, transparent, and sustainable architecture for regional and global trade and development.”

Seoul has been demanding that the Japanese government withdraw its unilateral restrictions on exports to Korea of three key materials imposed on July 4, which it considers retaliation for Korea’s Supreme Court ordering Japanese companies to pay compensation to Korean victims of forced labor during World War II.

A delegation of eight Korean lawmakers led by Rep. Chung Sye-kyun of the ruling Democratic Party also will make a five-day visit to Washington from next Wednesday to highlight Japan’s export restrictions and issues regarding the Korean Peninsula.

Japan set Thursday as its deadline for Korea to respond to its request to form an arbitration panel involving a third-party to resolve the dispute, though Seoul has already made clear it has no intention of doing so.

Yasutoshi Nishimura, the Japanese deputy chief cabinet secretary, said earlier Thursday that Tokyo was strongly urging Seoul to agree to the arbitration panel and will wait until midnight for a response.

But Kim In-chul, spokesman of the Korean Ministry of Foreign Affairs, said in a briefing later Thursday that Seoul “does not need to be constrained” by the deadline because “Japan unilaterally and arbitrarily set the date.”

Last month, Tokyo rejected Seoul’s proposal to create a joint fund made up of voluntary contributions by Korean and Japanese companies to resolve the compensation issue for forced labor victims from the Supreme Court rulings. Japan has maintained that the 1965 bilateral treaty normalizing bilateral ties between the countries, which provided the Korean government with an economic cooperation fund, settled all compensation matters. The Blue House has underscored it cannot intervene in the judicial branch and has called for a reasonable and speedy diplomatic solution to the issue.

Under Article 3 of the 1965 claims agreement, Clause 1 states that disputes should be settled “first of all, through diplomatic channels.” If disputes fail to be settled by such means, Clause 3 stipulates that it can be referred to an arbitration board of three arbitrators appointed by the two countries and a third party.