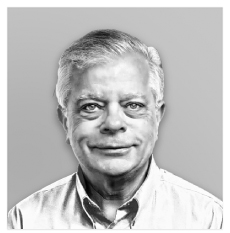 Someone once noted that there are two types of people: those who divide the world into halves and those who do not. We can certainly see there are essentially two types of societies. Most are autocratic, top-down nations where a dictator or oligarch operates as they see fit, often overriding any semblance of law. A smaller number of societies are nations of laws, where the presumption is that no one is above the law or regulations.

On the Korean Peninsula, we have examples of both types of governments. As much as we may hope for a unified society, ruled by law, there seems to be no chance of that happening for decades. Given that, the most advantageous thing we can do is make the best out of a bad situation in the northern half of the country.

The pending realities of 5G, big data and artificial intelligence are at hand. As one may expect, there is active discussion of privacy of data in “the cloud,” and what is the possible impact of the internet being part of our lives with countless smart devices beyond simple computers and telephones.
One disturbing consideration is the potential loss of freedom, as large corporations and governments will have surveillance capacities beyond most people’s imaginations. Our phones, PCs, cars and even household appliances will have the capacities to track and monitor our private movements and activities around the clock throughout the year.

Recognizing these challenges, some people are suggesting new controls at home. Other people are concerned about North Korea. The world’s most communist society has already leapfrogged into the wide use of cell phones, innovating its own unique uses. Yet no population is more closely monitored than the North. Many observers are dismayed about what the Pyongyang government may do with this new technology.

However, one may argue the lid has already been lifted from Pandora’s box. It is pretty difficult, if not impossible, to control the use of the internet and related technologies. On the other hand, China is a good example of how a government can offer partial web browsing while being able to fully leverage network technologies to monitor the activities of its citizens. In other words, particularly in East Asia, we have seen some very amazing applications — and controls — of internet-based technologies.

Should we look back to the beginning of this century, we find that South Korea boasted one of the most adaptive cell phone markets in the world. In terms of field testing of consumer acceptance, South Korea for a couple of years reigned supreme. Motorola stated so at a trade show in 2004 when it released the StarTAC 2004 here. The StarTAC was among the first mobile phone to gain widespread adoption; approximately 60 million StarTACs were sold worldwide, but much of the market research was done first in Korea. The Koreans were generally earlier adapters when compared to even their American counterparts.

All of which brings us back to North Korea. Some people are becoming alarmed that Pyongyang may take its “1984” regime to the next level with new surveillance and control tools that are coming online with 5G, big data and AI. Given enough time, most — if not all — of these people’s anxieties will be realized. It is virtually impossible to halt the spread of technology; it is only a matter of when and how it will be used or misused.

We expect autocratic oligarchies will use and abuse this next technological revolution. In the future, the shrinking number of nations that take laws seriously may be exceptions or even oases of human rights, etc. The problem facing this latter group is first understanding these new technologies and then creating the legal safeguards. All of this takes more time to happen than for technologies to creep into their countries. In this case, playing catch up may not only be feasible, it could well be too late.

So, what to do? Since we cannot stop North Korea from doing what it is destined to, perhaps we should aid Pyongyang in acquiring this new technology earlier. That small Northeast Asian society could serve as a test bed as to how its government and others will leverage new technology at a faster pace than what is likely to happen in law-based societies.

As outside nations observe and learn about misapplication and abuse of these future control tools, liberal, democratic nations may have a small time window to draw up necessary regulations and constraints in time to protect their human and other rights from nefarious domestic organizations within their borders.

As distasteful as it may be to provide top technology to Pyongyang, let’s not sugar-coat pending realities. Countries like North Korea will certainly acquire or copy new surveillance and control tools, regardless of sanctions, etc. It is better to turn a decidedly bad development that is beyond our control into something that may temporarily serve some positive purpose — warning and advising us before it is too late for our societies. In other words, it comes down to a choice of two bad options. We need to wisely choose between taking advantage of the timing differences between pre-emptive provision with study of advanced network technologies to North Korea and playing chaotic regulatory catchup at home.