Jeju’s garbage is piling up on land, in the sea: Visitors are part of the problem along with poor infrastructure

Jeju’s garbage is piling up on land, in the sea: Visitors are part of the problem along with poor infrastructure 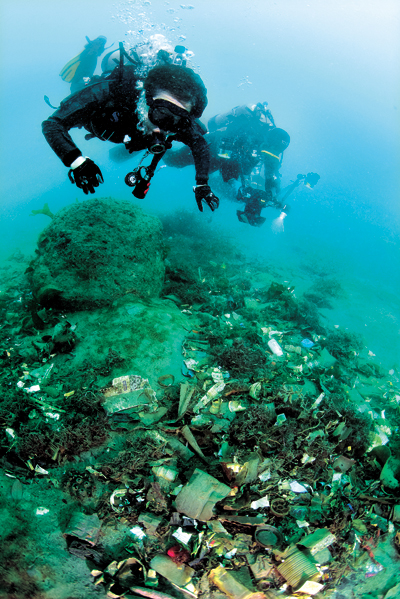 JEJU ISLAND - Jeju Island, located off the southern coast of the nation, is an hour’s flight from the capital city and is a favorite holiday destination.

On average, about 178 planes carry passengers daily between Gimpo International Airport and Jeju. The air route between Gimpo and Jeju was the busiest in the world, according to OAG, a global company providing travel data.

But with visitors come problems. And none has been mounting up so quickly as Jeju’s trash.

It was an ordinary afternoon in June. A car carrying a group of civic activists and reporters drove about 20 kilometers (12 miles) to the southeastern part of the island. A garbage incineration plant located in Hoecheon-dong, Jeju City, came into sight.

Much of the waste produced across the island is processed at this incineration plant, the island’s sole facility. But the capacity of the plant has already been reached.

It was past 6 p.m. but trucks loaded with waste idled in a long queue, waiting for their turn to unload.

“We fully operate all the facilities by working until midnight, but we process just the half the waste that is brought in,” said an official working at the plant.

Next to the incinerator, wood was stacked up because the regulations state that daily waste must be handled first.

Some waste is burnt directly in the incinerator. The waste that isn’t processed is transported to a nearby facility. There, the waste is compressed with white plastic into cubes. These gigantic white cubes dominate a landfill from its entrance to a tennis court that is reserved for use by the employees working there.

There are about 60,000 white cubes, each weighing 900 kilograms (0.9 tons). Some have been there for years. The plastic is ripped here and there and the cubes emit a strong and unpleasant smell.

On that day, 100 more cubes were added to the trash mountain.

“About 230 tons of waste is coming in every day but the maximum capacity we can handle is 134 tons,” said Kim Seung-hyun, who works at Jeju’s environmental management office.

“Since we have just one incineration plant on the island, it can’t keep up with the daily demand,” he added.

Recently, the outdated incineration plant was idled for a week, and the island was literally covered with trash.

The waste produced a bad smell and the ground was soaked with liquid from the waste.

Kim Jung-do, who works at the Korean Federation for Environmental Movement (KFEM), said, “Daily waste must go to the incineration plant but [due to the lack of incineration facilities] it is buried along with food waste here. If they keep doing it, the landfill will be saturated far sooner than expected.”

As of March, 340 tons of combustible trash was produced every day across the volcanic island but only half of it is incinerated. The rest, or 149 tons daily, is stacking up. 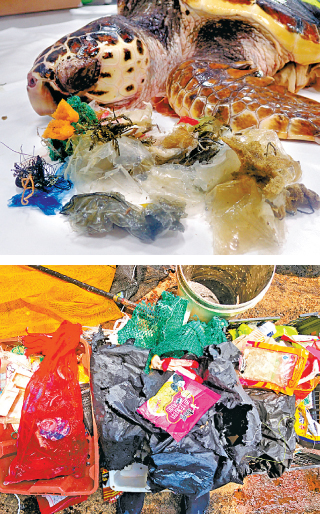 Top: A sea turtle found dead on a shore on Jeju Island had plastic waste inside its stomach. Above: A variety of trash is picked up by divers near Chagwi Island, Jeju. [NATIONAL INSTITUTE OF ECOLOGY, CHON KWON-PIL]

The total amount of waste including recyclable waste produced per day on the island doubled from 595 tons in 2007 to 1,311 tons last year.

About 1.93 kilograms of trash was thrown out per person in Jeju every day as of 2017, which is nearly twice the national average of 1.01 kilograms. What that means is that people who visit Jeju are also to blame for the mounting trash.

The number is continuously rising with Chinese tourists visiting.

The Chinese government banned travel to Korea in retaliation for the deployment of a U.S.-led Terminal High Altitude Area Defense (Thaad) anti-missile system in 2017.

That was a huge blow to Jeju’s tourism industry, but the industry is recovering.

The total number of non-Korean tourists who visited Jeju was 480,000 between January and April, a 72 percent increase from the same period last year.

The island is happy to host more visitors, but its waste processing infrastructure hasn’t been upgraded for years due to conflicts with residents.

A large-scale incineration plant being built in Dongbok-ri, Gujwa-eup, is still under construction. It is likely to be fully operational later this year.

“Until the new facility comes into full operation, I expect about 104,500 tons of compressed trash and 49,000 tons of waste wood will be piling up on the island,” said Park Geun-su, an official on the life environment team of the Jeju Special Self-Governing Province.

About 20,000 tons of compressed waste was shipped from the island last year, but some Jeju trash ended up in the Philippines and was the subject of embarrassing media coverage. Still, about 1,880 tons of trash from Jeju remains in the Philippines.

Apart from expanding the relevant facilities, experts say there should be much stricter regulations on disposable goods.

“Since Jeju heavily relies on tourism, the usage of disposables is much higher than any other places,” said Kim of KFEM.

“By amending the laws, Jeju needs to take control over the usage of disposable goods on its own,” he added.

From land to water

The waters surrounding Jeju are also heavily contaminated with trash from the island.

It took about 10 minutes by boat from the Jagunae Port to Chagwi Island, located off Seogwipo.

This tiny island used to be off-limits, but the ban was lifted in 2011. Ever since, the island has become the best fishing spot among anglers.

This reporter and nine members of Munseom 47, a gathering of divers living on the island, got together to clean up trash in the waters surrounding the island recently.

The deep blue sea of Jeju was shining under the blazing sun, but a different view unfolded once we dived in.

About 10 meters (32.8 feet) from the surface of the sea, every kind of trash was scattered at the bottom from beer cans to plastic wrappers.

Divers picked the waste out of the water by hand and the process took time, but they gathered about 200 kilograms of waste in just one hour of diving.

Kim Byeong-il, who has been diving in the sea off Jeju for the past two decades, said, “It’s been 10 years since I’ve been in Chagwi Island and the sea is totally ruined.”

“Fishing sinkers made with lead were everywhere at the bottom of the sea. We are the ones who will eventually eat the fish that are exposed to the lead,” Kim said.

Far right: About 900 kilograms of waste is compressed into a white cube due to a lack of capacity in the incineration plant on Jeju. After being compressed, the white cubes pile up at a landfill in Hoecheon-dong, Jeju City. The total number of cubes in the Hoecheon-dong landfill is about 60,000. [CHON KWON-PIL]

Unlike trash on the land, waste chucked in the water is invisible, and can be neglected for a long time.

According to research conducted by the National Nature Trust and Munseom 47, the bottom of Jaguri Beach near Jeongbang Falls is covered with a one-meter thick layer of trash, a jumble of clothes, cans and plastics. The trash stretches about 150 meters to the south. The expanse of sea waste found near Jaguri Beach is the size of two soccer fields.

The Jeju Special Self-Governing Province said about 20,000 tons of sea waste is produced every year but only half is collected.

Of the 20,000 tons, two-thirds of the waste comes from Jeju Island.

Breaking down its components, plastics account for 56.5 percent, with fishing tools and pieces of Styrofoam coming in second at 14.4 percent. Wood makes up 5.1 percent.

“Since Jeju is located where major ocean currents meet, all the marine waste from the southern part of the country and Japan and China keeps coming into the sea of Jeju,” said Lee Gi-wu, an official working at the ocean industry team for the Jeju Special Self-Governing Province.

“We have more cafes along the coast and more tourists who visit the island for fishing. They are other reasons for the increase in marine waste,” he added.

Some say the current system of how marine waste collectors are paid should be changed.

“Marine waste collectors are paid by weight, thus they tend to pick up heavy fishing tools first,” said Lee Tae-hun, who leads another group of divers who help clean up the waters in Jeju. “Because of this, lightweight plastics and vinyl are not collected at all.”

Marine debris affects the ecosystem, too.

Discarded nets that spread like spider webs stop coral from growing and often take the life of sea turtles.

Of the six sea turtles found dead in the sea of Jeju last year, all had plastic inside their stomachs, according to the National Institute of Ecology (NIE), which conducted autopsies on the sea creatures.

A baby turtle was found dead only 11 days after being sent to the sea near Jungmun in September last year. The baby turtle also turned out to have plastic inside its body.

“Sea turtles live on seaweed and sea jelly. They often mistake plastics as food,” said Lee Hye-rim, a researcher at the veterinary medicine department of the NIE. “In order to protect sea animals, action needs to be taken on sea waste.”