Song-Song couple is officially over

Song-Song couple is officially over 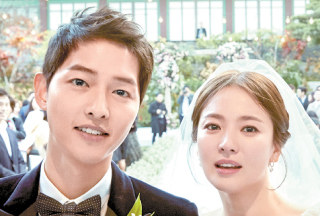 Top celebrity couple Song Joong-ki and Song Hye-kyo have legally separated after a year and nine months of marriage, according to a decision made by the Seoul Family Court on Monday.

It was reported that the decision took about five minutes, as both sides have reached an agreement on most of the separation causes. There was no alimony or division of properties between the couple, revealed Song Hye-kyo’s agency United Artists Agency Korea.

Their separation became official a mere 26 days after Song Joong-ki’s lawyer, Park Hae-hyun filed divorce papers to the court on the behalf of his client on June 27.

At the time, Song Joong-ki said through his agency, Blossom Entertainment, that he “hopes that the separation procedure can go about as smoothly as possible rather than blaming each other.” Not long after his official press release, Song Hye-kyo confirmed through her agency that the couple was divorcing due to “differences in their personalities.” She pleaded to the media and the public to refrain from making provocative comments and reports.

The two met through on the set of the KBS drama series “Descendants of the Sun” (2016), becoming famously known as the “Song-Song couple” for their chemistry on set. After the series ended, there was wide speculation that the couple was secretly dating, but the two denied the rumors until July 2017, when they confirmed that they were in a relationship and were planning to get married.

The former couple had tied the knot on Oct. 31, 2017, and it was considered to be the wedding of the year.