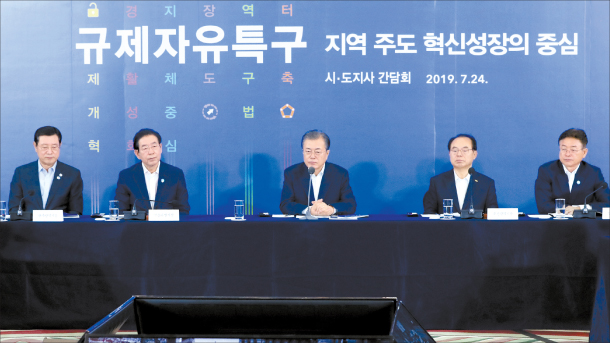 President Moon Jae-in, center, listens to a report on the creation of regulation-free special zones Wednesday by Minister of SMEs and Startups Park Young-sun during a meeting with mayors and governors. The meeting was held in Busan. On the previous day, seven areas were selected by the government as special deregulation zones. These zones are allowed to conduct experiments in certain types of businesses, such as those blockchain or autonomous driving related, for two years. The seven zones are in Gangwon, Daegu, South Jeolla, North Chungcheong, North Gyeongsang, Busan and Sejong. From left, Gwangju Mayor Lee Yong-seop, Seoul Mayor Park Won-soon, President Moon, Busan Mayor Oh Keo-don and North Gyeongsang Governor Lee Cheol-woo. [YONHAP]