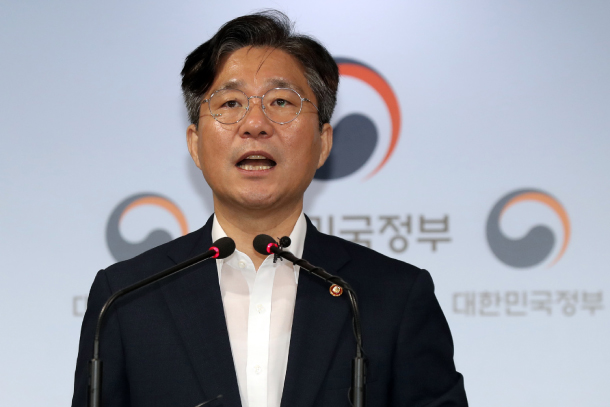 Minister of Trade, Industry and Energy Sung Yun-mo speaks at a press briefing on Wednesday at the Central Government Complex in Seoul. The Korean government sent a formal opinion to Tokyo urging not to remove Korea from its list of countries that receive preferential trade status. [YONHAP]

Seoul urged Tokyo not to remove Korea from a list of countries receiving preferential trade status as the bilateral spat is poised to widen.

Korea’s Ministry of Trade, Industry and Energy said Wednesday that it sent a formal opinion to Tokyo arguing that the removal would threaten the economic and security partnership between the two countries.

Japan announced earlier that it would take Korea off its so-called “white list” of 27 countries given preferential treatment in export processing by amending trade regulations, citing security reasons and an “erosion of trust.”

The first step for the removal - accepting opinions - ended Wednesday.

Removal from that list would impact many products beyond the three industrial materials used to make semiconductors and displays that Tokyo started restricting on July 4.

“[The measures] shake the core of the economic partnership between Korea and Japan and the security cooperation in Northeast Asia that has been closely maintained and developed over 60 years,” said Minister of Trade Sung Yun-mo during a press briefing at the Central Government Complex in Seoul.

“The groundless export restriction measures on three semiconductor materials must immediately be restored to their original state,” said Sung. “The amendment […] that seeks to remove Korea from the white list must also be withdrawn.”

Japan will probably complete Korea’s removal from the “white list” next month.

According to Japanese broadcaster NHK, Japan’s Trade Ministry said it received over 10,000 opinions about Korea’s removal and that most approved of the measure.

Korea’s trade minister argued against Tokyo’s restrictions by saying that Japan lacks an understanding of Korea’s export control system. Sung said the measures violate the principles of free trade and could have a negative influence on the global supply chain.

Concerns about a global impact from the trade row were reflected in a letter sent by six U.S.-based technology industry groups on Tuesday to Korea’s top trade negotiator Yoo Myung-hee and Japan’s minister of economy, trade and industry, Hiroshige Seko.

“Non-transparent and unilateral changes in export control policies can cause supply chain disruptions, delays in shipments and ultimately long-term harm to the companies that operate within and beyond your borders and the workers they employ,” wrote the groups, which included the Semiconductor Industry Association and the Information Technology Industry Council.

“We […] urge both countries to expeditiously seek resolution of this issue and refrain from actions that could escalate the situation.”

Yoo, who is currently in the United States to meet with industry officials about the trade conflict, cited the letter and pressed Japan to withdraw its measures in a Facebook post on Wednesday.

The dispute between the two countries also arose in Geneva later that day during a World Trade Organization (WTO) General Council meeting.

Although the WTO meeting was not intended to make a decision on Japan's export restrictions, it allowed the two countries to argue their cases to other members.

Seoul believes that Japan's measures violate Article 11 of the General Agreement on Tariffs and Trade (GATT), which limits restrictions on exports.

Korea’s Trade Ministry emphasized separately that Seoul is preparing to file a complaint through the WTO’s dispute settlement process.

To dampen worries about the fallout of the growing dispute with Japan, the Korean government also met with global credit rating agencies Moody’s, S&P and Fitch Ratings earlier this week.

Although none of the agencies have yet revised Korea’s credit rating as a result of the trade dispute, Fitch Ratings expressed concerns in a recent report that the trade row is expected to hurt markets beyond Korea and Japan.

The Ministry of Economy and Finance said it sent officials to the Asia headquarters of the three credit ratings agencies on Monday and Tuesday to explain Korea’s response to Japan’s trade restrictions, such as reducing the country’s reliance on Japanese materials.

According to the Finance Ministry, the credit agencies expressed concerns about a potential negative influence on the global economy during the meetings but said that the impact so far has been limited.

The restrictions, if drawn out, are expected to take a toll on Korea.

The Bank of Korea slashed the benchmark interest rate last week as a pre-emptive response to the worsening trade spat.