[INTERVIEW] Former Japanese ambassador has love and hate for Korea

[INTERVIEW] Former Japanese ambassador has love and hate for Korea 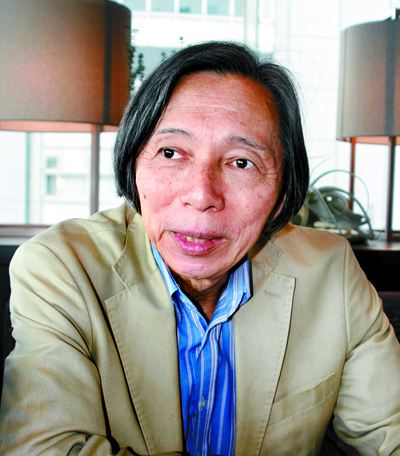 Former Japanese Ambassador to Korea Masatoshi Muto says a global mindset is necessary to solving issues between the two nations, rather than dealing with the situation emotionally.

Muto referenced the recent spat between Korea and Japan, in which history, economy and politics collided and led to a trade row when Japan launched restrictions on exports to South Korea of three key materials — fluorinated polyamides, photoresists and hydrogen fluoride — needed for semiconductors and smartphones on July 4.

Japan is also expected to exclude South Korea at the end of July or early August from a “white list” of 27 countries subject to preferential treatment on export processing by amending trade regulations, citing security reasons and erosion of trust.

In response to Japan’s attacks on the trade front, Korean consumers are taking matters into their own hands by boycotting Japanese consumer goods.

These days, Muto often appears as a guest in Japanese current affairs TV programs. Yet his stance toward Korea has taken a turn.

Muto was a man who had shed tears and thanked Koreans on TV for helping Japan get through the 2011 Tohoku magnitude of 9.0 earthquake.

“I sincerely thank Koreans for their compassion in giving comforting words and encouragement to Japanese citizens who were the victims of a big disaster,” said Muto in March 2011 on a Korean TV show.

But unlike eight years ago when he expressed gratitude to Koreans, Muto now criticizes Korea with harsh comments.

In 2017, Muto even published a book, the Japanese title of which translates to “Fortunately, I Wasn’t Born a Korean,” which was criticized for being anti-Korean. The first chapter is titled, “The Worst President, Who is Moon Jae-in?” followed by “Intense Anti-Japanese Storm Begins.”

With Korea-Japan relations deteriorating drastically in the past few months, the JoongAng Ilbo sat down with Muto at a hotel in Tokyo last week to talk about compensating Korean victims of the Japanese colonial era, efforts by the Japanese government to mend ties with Korea and finding a solution for both countries.

The following are edited excerpts of the interview, which was conducted in Japanese.

Q. Although there were historical conflicts and the issue regarding Dokdo, Korea’s easternmost islets in the East Sea, both countries managed to contain their stances and cooperate economically. Do you think we should continue to make such efforts?

A. The situation today seems somewhat different. I am very disappointed in the Moon Jae-in administration’s actions degrading the foundation of trust that was established throughout the years.

Everywhere I go in Japan, no one talks about Korea in a good way. In the past, when the relationship between the governments became ugly, politicians would stand in the middle and fix it, but now, there is no one in the Japanese National Diet that is trying to do this. The Japanese have a tendency of not showing their dissatisfaction and keeping it to themselves, but once they explode, they really explode. Disappointment has continued to pile up like the issue of reaching a deal in 2015 for victims of Japanese wartime sexual slavery, [euphemistically referred to as comfort women], and the issue of Korean victims of forced labor [during Japanese colonial rule of the Korean Peninsula]. I believe that the efforts to improve Korea-Japan relations have come to nothing.

It doesn’t seem fair that Moon is criticized for the Korean Supreme Court’s ruling in favor of Korean victims of forced labor during Japanese colonial rule of the peninsula.

Thus far, the Korean government has compensated Korean victims of forced labor twice. This seems to mean that Korea has acknowledged that the Korean government is responsible for compensating the victims. However, I can’t understand why such a ruling has been reached after such a long time. A ruling that creates a big international issue is rare in other countries. In Japan, a ruling like this would not have concluded.

And another thing, although people say that it was the judgement by the judicial authorities of Korea, the former chief justice of the Supreme Court was arrested [for allegedly colluding with justices and lawyers to influence politically sensitive trials including the trial concerning Korean victims of forced labor]. If that is so, who appointed the current chief justice? Wasn’t the former chief justice arrested? With incidents like that happening, would any ruling go against President Moon’s interests? President Moon was one of the legal counsels that said individuals’ rights to claim damages were not terminated.

Then how should we solve the issue of Korean victims of forced labor during Japanese colonial rule?

My words might sound cold, but there is no choice but for Korea to solve the problem by itself. The “1+1” proposal [by Korea where Japanese and Korean companies voluntarily compensate the Korean victims of forced labor together] is in itself a thing that shakes the foundation of Korea-Japan relations that have already been established. The Japanese government will not change its stance that the 1965 bilateral treaty signed between Korea and Japan to settle colonial-era issues resolved all problems.

Didn’t the Japanese government additionally compensate comfort women victims in the past?

Although all legal issues regarding compensation were resolved with the 1965 bilateral treaty, the Japanese government also thought that they needed to show their sincerity regarding the comfort women victims’ pain and distress. That is why we created the Asian Women’s Fund and why [former Japanese Chief Cabinet Secretary Yohei Kono apologized to comfort women victims in 1993 for their mistreatment during the Japanese colonial rule of Korea] with his “Kono Statement.” To any extent, that was a voluntary measure on Japan’s part.

When I was working at the Japanese Embassy in Seoul, I oversaw this issue. At first, the Korean Ministry of Foreign Affairs thought of our efforts as highly “unsatisfactory but done as best as they could.” But, this effort was not accepted by the group of victims, which lingered on until the Park Geun-hye government. The negotiation between Korea and Japan in 2015 regarding comfort women victims was the result of both countries yielding an settling on an agreement. Japan has done whatever it can. However, in reality, the Moon government has overturned the agreement.

Some people see Japan’s restrictions on exporting materials to Korea as a tactic that aims to attack the Korean economy. Do we need to worry about this?

This is not true. If Korea’s economy falters, Japan is also harmed. If there was such a plan to retaliate with the policy, Japan should have banned exports. What Japan wants is a country that they can trust as a partner in international society.

During the Group of 20 summit in Osaka, Japan, Japanese Prime Minister Shinzo Abe didn’t schedule a one-on-one meeting with Moon. Don’t you think that difficult situations like the current one should be solved through summits between Korea and Japan?

I believe it is natural for Koreans to be angry at the measures. If the two leaders had met and Abe notified Moon of the regulations, Koreans would not have thought the restrictions were suddenly imposed on them.

A summit is held to stake positions and fine-tune understandings based on each side’s national interest, but even if we were to meet right now, those sorts of discussions are not possible.

In the end, aren’t the forced labor and comfort women issues cases of historical awareness?

In the case of historical awareness, Japan must study more about their past affairs, which is exactly what Koreans are saying. However, I wish that Koreans would also acknowledge the efforts of Japan a little more.

There was even an incident like this. Posco founder Park Tae-joon had been visiting several organizations like the International Monetary Fund (IMF) to raise funds under the orders of former President Park Chung Hee, but was having difficulties. But Yoshihiro Inayama, who was at the time the chairman of Nippon Steel, told his men to help Korea as much as they could. In those days, there were many Japanese who thought Japan’s annexation of Korea was Japan’s wrongdoing, so there were many cases of cooperation between the two countries.

I want people to understand Japan’s efforts a little too. Then, the idea that Japan did not regret or apologize for their actions will dissipate a little. Seen in that way, Japan’s apology may have been unsatisfactory, but that does not mean Japan did not apologize.

Koreans have difficulty accepting the claim that Japan contributed to modernizing Korea.

What I am talking about is the cooperation between the two countries after World War II. Some Japanese say that Japan helped Korea with things like education during the Japanese colonial period, but I tell them to stop saying that. That was not something to help Koreans, but was to make Korea a part of Japan and absorb the country as its own.

However, postwar cooperation is an effort to develop Korea so that both countries can become good partners.

Today, Koreans might see me as a Korea hater, but I have both love and hate for the country. In the last 40 years, I have worked as a diplomat and observed Korea become such a developed country, and I have also been involved, a little, with Korea-Japan relations, which I feel was worthwhile and a joyful thing.

But I feel that I am becoming more and more tired. It is like a married couple’s relationship where their affection has faded for each other. Concerning recent Korea-Japan relations, even I feel regretful.

What should we do in the future?
Instead of solving issues between the two countries with the widespread sentiment of the people, we need to solve our problems with a global mindset. The reason why France and Germany were able to bridge a chasm, created because of their shared history, was because both countries respected each other’s objective facts, and that’s thanks to an agreement to not allow people’s sentiments to affect the two countries’ relationship.

They say that it is difficult for neighboring countries to get along with each other, but it is not impossible.