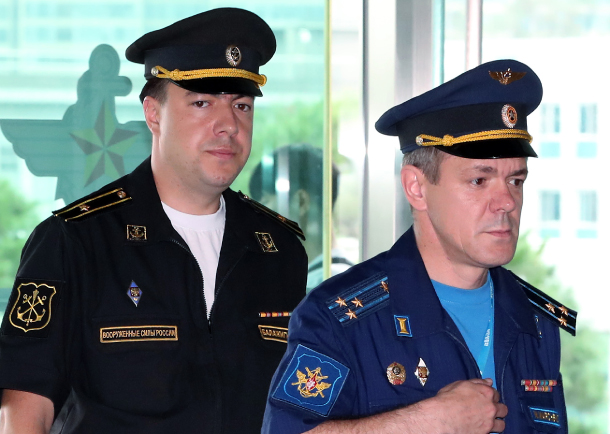 Esper, who was sworn in Tuesday after one of the longest vacancies of the post in the Pentagon’s history, told reporters Wednesday that Russian military flights southward over the East Sea were nothing new, but violating Korean airspace was.

“The Koreans obviously responded, as well […] to kind of deter that,” he added.

When asked about Japan’s criticism of the Korean aerial response based on its territorial claims over Dokdo, Esper said he planned to discuss the two countries’ relationship in relation to the incident on a trip to Korea and Japan early next month.

But Moscow continued to deny Korea’s claim that its sovereign airspace was violated by the A-50 - the first time a foreign military aircraft has done so since the 1950-53 Korean War.

Military and civilian officials from the two countries held consultations over the incident at Korea’s Defense Ministry in central Seoul on Wednesday, but the meeting ended with no admission on Russia’s part that its plane violated Korean airspace.

Information presented by Korea included military radar data and footage taken from its fighter jets, as well as audio recordings of their pilots notifying the Russian A-50 plane that they would fire warning shots.

According to the Defense Ministry, Russian officials merely said that the information would be relayed to Moscow and made neither a denial nor an acceptance of whether there had been a violation.

Their silence could testify to a lack of coordination on Moscow’s part suggested by contradictory responses to the incident on Tuesday. On Wednesday, the Blue House announced that a military attache from the Russian Embassy acknowledged on Tuesday that a penetration into “unplanned territory” had been made by one of its planes, likely due to a mechanical error, but that there was “no intention to violate” Korea’s airspace.

But Russia’s Defense Ministry denied any such violation in a written response to Korea Tuesday, and blamed Seoul for “acting unprofessionally” with its warning shots against the two Tu-95 bombers that entered the Kadiz. No mention was made of the A-50, which the Korean military said reached as close to 8 kilometers (5 miles) of Dokdo, which was within the country’s territorial airspace around Dokdo.

The Russian Embassy in Seoul also posted on its Twitter account Wednesday that no acknowledgement of an aerial violation had been made in an apparent about-face from the words of its military attache a day earlier.

Korea’s Defense Ministry on Thursday said it would await Moscow’s reaction to the new evidence it has presented, though it stressed earlier that “any outside infringement of Dokdo will be met with a firm and serious response” in a warning appeared to be leveled at both Russia and Japan.