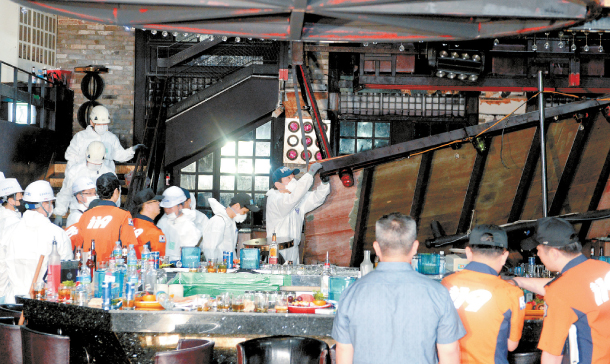 Police and forensic officials on Saturday examine a Gwangju nightclub in which an indoor balcony collapsed earlier that day, killing two and injuring 25 others, including athletes participating in the 2019 FINA World Aquatics Championships. [NEWS1]

An indoor balcony at a nightclub in the southwestern city of Gwangju collapsed Saturday, killing two Koreans and injuring 25 others, including foreign athletes participating in the 2019 FINA World Aquatics Championships.

Gwangju authorities said eight foreign athletes were lightly injured in the accident, and seven of them appeared to have returned to the Athletes’ Village right after the collapse. Whether they sought medical assistance inside the village was not immediately known. The nationalities of the injured players, mostly women, included the United States, New Zealand, the Netherlands, Italy and Brazil, said police.

A 38-year-old Korean man died inside the nightclub on Saturday after falling with the balcony, while another 27-year-old man died while receiving medical treatment at a nearby hospital. Gwangju police said the 27-year-old man also was on the doomed balcony.

USA Water Polo, the national governing body for water polo in the United States, said in a statement on Saturday that members of the water polo senior national teams were at the nightclub at the time of the accident, celebrating the women’s national team’s gold medal victory.

Athlete Kaleigh Gilchrist suffered a deep laceration on her left leg and underwent surgery at a hospital in Gwangju, the group said, while Paige Hauschild and Johnny Hooper suffered lacerations in their right arm and left hand respectively that required stitches. Ben Hallock suffered minor scrapes on his legs, the statement continued.

According to police, the Coyote Ugly nightclub was on the second floor of a seven-story building in Gwangju, 167 miles south of Seoul, and popular with a young clientele aged between 20 and 40. The club featured a lounge bar, DJs and dance floors, and operated from 7 p.m. to 6 a.m.

Some 370 people, including 50 foreigners, were inside Coyote Ugly last Saturday at around 2:30 a.m., when a balcony on the club’s second floor overlooking the lounge bar collapsed. Fire fighters and police officers in Gwangju said steel fixtures supporting the balcony, which was 23 square meters (248 square feet), snapped. Apparently they were unable to support the nearly 40 people dancing on it.

The balcony was about 2.5 meters (8 feet) above the floor.

Three people related to operations at the nightclub, including the 51-year-old owner, were booked on charges of causing dozens of casualties by ignoring safety rules. Gwangju police said it appeared the club illegally enlarged its second floor.

The balcony was part of a second floor that was 200 square meters, although the club had received permission from city officials to build a second floor of only half that size, only 108 square meters. Police are also zeroing in on the possibility of faulty construction of the balcony.

The Gwangju city government office formed a taskforce over the weekend to look into the tragedy, and Gwangju Mayor Lee Yong-sup vowed in a statement to make sure similar cases don’t reoccur. The accident occurred only a single day before the international aquatics event was about to end after a 17-day run. The closing ceremony was held Sunday.