Yoshiaki Kawamoto has been visiting Korea for the past 20 years for one purpose - to apologize for the Japanese annexation of Korea.

“It is unfortunate that the Japanese government has not apologized with humility,” Kawamoto, a 77-year-old former professor of history, told the JoongAng Ilbo on Monday during his visit to the statue of comfort women in Busan, representing victims of Japanese wartime sexual slavery. “The Japanese government has been saying that the Korea-Japan agreement of 1965 [to normalize relations] has settled the issue once and for all but the victims are hoping for a sincere apology.” 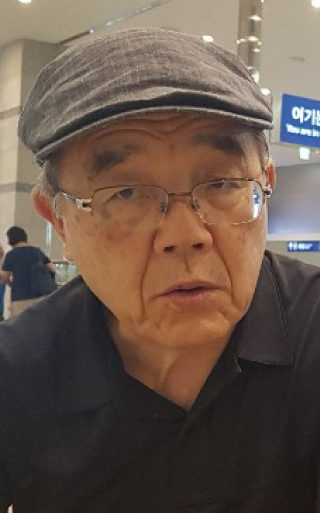 Japan annexed Korea from 1910 to 1945. Up to hundreds of thousands of Asian women, many of them Koreans, were forced to serve in military brothels for Japanese troops during World War II.

On Dec. 28, 2015, Korea and Japan signed a deal attempting to resolve the issue of Japan’s wartime sexual slavery. It included an apology from Tokyo and a 1 billion yen fund for the victims, which amounted to about $8.8 million at the time. The Moon Jae-in government, which was inaugurated in May 2017, has pointed out that the 2015 deal was “flawed,” though it said it will not scrap it.

Kawamoto upon visiting the statue located in front of the Japanese consulate in Dong District, Busan, on Monday knelt before it.

“I couldn’t help but kneel when I saw the statue,” he said. “There are other Japanese people who feel apologetic about Japan’s invasion of Korea.”

Kawamoto is currently leading a civic organization called No More Invasion. He has been visiting Korea every year for the past 20 years, although this was the first time that he visited a comfort women victim statue.

He said his ties with the Korean people date back to his youth.

“I was an elementary student at the time,” he said. “I picked up some metal scrap from the streets and went to a junk shop run by a Korean person. I thought I would get at least 2 yen [$0.02] for the piece of metal but he only gave me 0.5 yen. So I called him Josenjing [slang word in Japanese for Koreans] out loud a couple of times and held Koreans in contempt.”

“It was only later that I learned about the history of Kanto Massacre in 1923,” he said. “Apparently, during that time, Korean people were singled out for their mispronunciation of certain words in Japanese and killed. It broke my heart to think that I once harbored the same ill feelings toward Koreans.”

Kawamoto decided that one way to make amends for his deeds was to teach the modern history of Japan, without omitting events such as the Japanese invasion of Korea.

“National history classes at the time dwelled on topics dating back to ancient times, which meant that some history classes simply did not teach students about some of the more modern events,” he said. “I would plan the curriculum so that the students would learn about the modern history of Japan first, and especially about the details of the Japanese invasion of Korea. Once, some of my students personally paid a visit to a Korean teacher at the school to apologize for Japan’s invasion and annexation of Korea.”

Japan announced earlier this month that it would take Korea off its so-called “white list” of 27 countries given preferential treatment in export processing by amending trade regulations, citing security reasons and an “erosion of trust.”

“It is embarrassing to see the way Japan addresses Korea in a high-handed manner,” Kawamoto said. “It is my hope that the two Koreas will be united to become a stronger nation to check Japan and put it in its right place.”