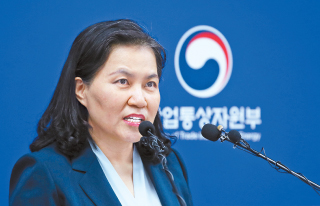 Trade Minister Yoo Myung-hee speaks about her visit to the United States last week to raise awareness of Tokyo’s export restrictions against Seoul on Monday at the Government Complex in Sejong. [YONHAP]

Minister for Trade Yoo Myung-hee said Monday that Tokyo turned down Seoul’s request for discussions with Japan’s Minister of Economy, Trade and Industry Hiroshige Seko at a RCEP ministerial meeting to be held from Friday in Beijing.

The RCEP is a proposed free trade agreement between 16 Asian countries. Seoul had hoped to use the forum to engage in senior-level discussions with Tokyo.

“We had requested talks, but received response that it would be difficult due to scheduling,” said Yoo at the Government Complex in Sejong. “As we have said before, we are open to talks whenever and wherever.”

Dialogue between the two countries remains stalled as Tokyo is set to expand its export restrictions against Seoul by removing Korea from its “white list” of trusted trade countries. Senior trade officials met on the sidelines of RCEP discussions last week at Zhengzhou, China, where Tokyo rejected Seoul’s call for higher-level talks.

The senior trade official, who visited the United States last week to raise awareness of Tokyo’s measures to restrict semiconductor material exports to Korea, remained optimistic of earning U.S. support in the ongoing trade row. She said U.S. officials and industry experts were concerned about the worsening trade spat.

“U.S. industry officials said they were beginning to feel the impact from Japan’s measures,” said Yoo, explaining that industries beyond tech expressed concern about Japan’s measures, saying that semiconductors are used in all types of products.

Korea remained concerned over Japan’s potential expansion of its export restrictions beyond semiconductor materials. Japanese media has reported that Tokyo will approve Korea’s removal from its “white list” on Aug. 2.

The removal could tighten export procedures for over 1,000 categories of Japanese products bound for Korea.

“[You] need to look at the global impact from Japan’s measures […] and provide a solution,” said Kim, addressing Seko in a radio interview with CBS on Monday.

“Japan is leading us to an inevitable situation […] we would like to resolve this through dialogue.”

Kim said that Korea will likely file a complaint through the WTO if dialogue is not re-established.

Meanwhile, the trade spat between the two countries is expected to expand to another front as Japan has disputed Korea Development Bank’s financial support to the local shipbuilding industry.

Yoo addressed the action, explaining that the two countries are currently undergoing consultations regarding the matter, the first step of the dispute settlement process at the WTO. The official declined to further comment on the issue.

Legal proceedings at the WTO will only start if consultations fail to produce an agreement.