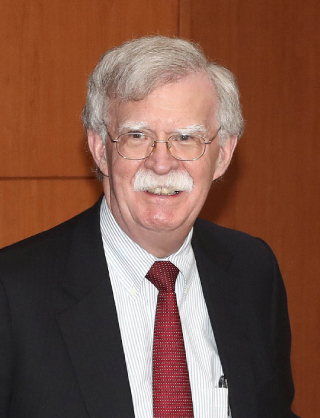 Washington plans to demand Seoul pay a total yearly amount of $5 billion for the stationing of U.S. Forces Korea (USFK) in the next negotiations for a bilateral defense cost-sharing deal, according to multiple foreign affairs and security sources on Monday.

One source in Seoul told the JoongAng Ilbo Monday, citing a U.S. government official, “The White House internally has confirmed $5 billion as the tentative amount” it expects Korea to pay.

“This amount is based on a new calculation method developed by the U.S. State Department,” the source said, adding that “the amount is non-negotiable.”

During his two-day visit to Seoul, Bolton met with Chung Eui-yong, director of the Blue House National Security Office, Foreign Minister Kang Kyung-wha and Defense Minister Jeong Kyeong-doo. His visit came amid an ongoing trade spat between Seoul and Tokyo over Japan’s unilateral export restrictions on Korea, and the U.S. push for Korea to send troops to the Strait of Hormuz to help with U.S. efforts to protect the strategic waterway off the coast of Iran.

But a Washington source said, “The priority of Bolton’s visit to Korea was not to request for engagement in the Strait of Hormuz nor to improve Korea-Japan relations, but to increase Korea’s share of defense cost-sharing.”

A source in Seoul likewise said, “Bolton emphasized increasing defense cost-sharing in his meetings with our officials. After proposing a rough estimate, he conveyed the idea, ‘We are considering this amount, so try your best to match it.’”

Following Chung and Bolton’s meeting last Wednesday, the Blue House said that Seoul and Washington agreed to negotiate the cost-sharing arrangement for the USFK after 2020 in the “most reasonable and fair” direction.

A government official said afterward that Bolton “spoke of paying more in defense cost-sharing,” but added, “It cannot be confirmed if an exact amount was mentioned.”

U.S. President Donald Trump has consistently demanded allies pay more for defense cost-sharing, regardless of the circumstances or the actual contributions being paid.

After months of tough negotiations, Seoul and Washington renewed their bilateral Special Measures Agreement (SMA) for one year last March. Seoul agreed to pay 1.0389 trillion won ($920 million at the time of the signing), which was 8.2 percent more than what it spent last year for the stationing of the USFK. Korea paid around 960 billion won in 2018, which was known to be about half the total expense for stationing the USFK.

The next round of negotiations between Seoul and Washington for the 11th SMA is expected to begin soon.

A diplomatic source familiar with the situation said, “The United States normally does not explain how items are calculated. During the negotiation progress, a battle over whether to increase or decrease the total amount unfolds.”

In the negotiations for the 10th SMA, Washington asked Seoul to share costs for “operational support,” a new category that included deployment of strategic assets and combined training expenses. Seoul refused, and this category was not included in the final deal.

But there is now a likelihood that such an operational support category will be included in the next round of bilateral cost-sharing negotiations.

Washington might request a sharing of the cost of the deployment of the U.S.-led Terminal High Altitude Area Defense (Thaad) antimissile system in Korea.