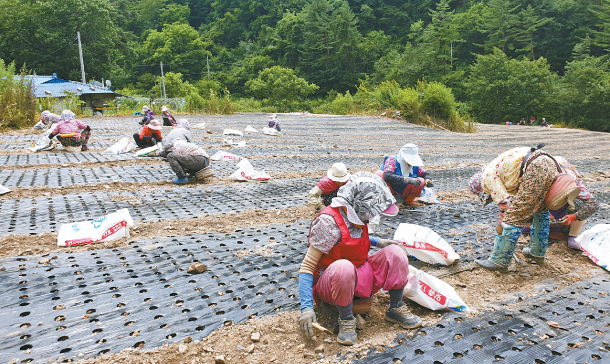 A group of seasonal farmworkers in their 70s and 80s plant chives at a farm in Seokpo-ri, Bonghwa County, North Gyeongsang, on July 23. [PARK JIN-HO]

Foreign workers were spotted in fields all around a village in Seokpo-ri, Bonghwa County, North Gyeongsang, on July 23, harvesting highland vegetables under the scorching sun.

A 5-ton truck was busy moving the harvested vegetables from the entrance of the field.

A 53-year-old surnamed Seong was in charge of a group of foreign workers in their 30s from Thailand and China. They had been harvesting white radishes.

Seong said he gathered the workers in Seosan, a city in South Chungcheong, and came to Bonghwa County three days ago. He said that his group of some 10 people is planning on moving back and forth between Bonghwa and Taebaek in Gangwon, a little over an hour by car.

Seong has been leading seasonal farmworkers for 15 years, going around the country each time the season changes. After farmers call Seong, he recruits workers and oversees farms’ harvesting and shipping and pays his workers for their day’s work.

“Because there are no people in Bonghwa who can do the work, the farmer contacted me, even though I am in Seosan,” said Seong. “Starting in Haenam, South Jeolla, in March, I have been harvesting white radishes and cabbages with a work team of around 10 people and then went to Buan County, North Jeolla, Hongseong County, South Chungcheong, and Seosan in May.”

Seong said it isn’t just Bonghwa that lacks workers, but the whole country. The Korean workers that he worked with were mostly seniors in their 70s or over, so he relies on young and strong foreign workers to do the heavy lifting.

However, Seong admitted half of the foreign workers working for him are in Korea illegally.

“I have no choice but to use illegal immigrants because farmers could suffer massive damage if they miss their shipment schedule,” Seong said. “A few years ago, a number of farmers presented a petition to county offices and related organizations because their harvest was spoiled when immigration officials launched a crackdown on a few areas to bust [illegal immigrants].”

Farmers argue that policies for foreign workers to work legally need to be amended as current laws are too limiting. Foreign workers can be hired through the Employment Permit System that allows them to work for a maximum of four years and one month in Korea, while a seasonal worker program helps foreigners receive a C-4 visa for short-term employment, which allows them to stay in Korea for 90 days, however, applications for both must be made before entering the country.

Workers availing of the Employment Permit System or the C-4 visa that worked on farms across the country amounted to only some 10,000 foreigners this year. Compared to the around 1.02 million farms in Korea, this number does not quite cut it.

The lack of workers in rural areas came to the spotlight following an accident on July 22 that killed four people in Samcheok, Gangwon. A van carrying seniors and foreign workers rammed into a guardrail and flipped over off a road after being in transit for over five hours. The van was said to have departed from Hongseong County, police said.

The distance that workers have to travel is risky, especially considering all the Korean farm workers in the van were over 60. Most of the driving takes place at dawn and drivers are in danger of dozing off because of the long drives. In addition, the vehicles that carry the workers are not always in good condition.

Police suspect negligence on the driver’s part or a brake malfunction.

Experts are calling for a systemized approach to solve farmers’ problems, which could also be beneficial for those seeking jobs.

“Although the chronic lack of workers in farm villages can’t be solved right away, we do need to vitalize a job providing platform that connects the idle manpower in cities and Koreans in rural areas to farms,” said Ham Chang-mo, a researcher at the Chungbuk Research Institute. “We also need to create a database on what kinds of crops are produced in certain areas, when the demand for manpower increases and how much of the population around the area is able to do manual labor.”