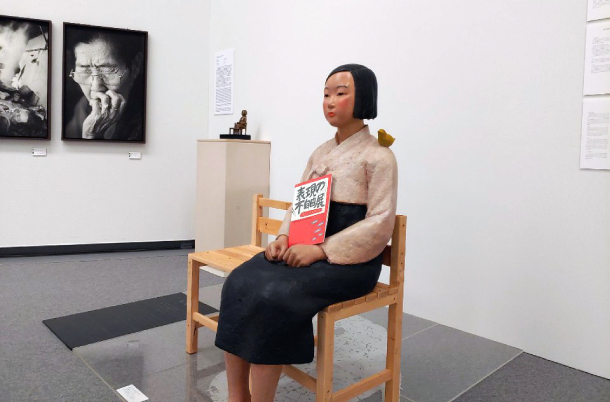 This photo, provided by artist Kim Un-seong, shows a “comfort woman” statue that will be displayed at the 2019 Aichi Triennale set to open in Nagoya, Japan, on Thursday. [YONHAP]

Japanese officials have ordered the removal of a statue of a girl representing victims of Japan’s World War II-era sexual slavery, which has been on display at an international arts festival in Aichi Prefecture, central Japan, according to the festival’s organizers on Saturday.

The statue, which symbolizes Korean women who were forced to serve as sexual slaves for front-line Japanese soldiers during the war, was created by a Korean artist and has been on display at the Aichi Triennale international contemporary arts festival.

Japan’s top government spokesman, Yoshihide Suga, and Hideaki Omura, governor of Aichi Prefecture, notified the festival’s organizers that the statue should be removed.

The Japanese organizers of the art festival protested against the notification to remove the statue.

In a joint statement, the organizers denounced the notification as the “biggest post-war censorship” and “historic violence.”

The organizers said they are considering taking legal action against the notification.

Kim Un-seong, the Korean artist who created the statue, condemned the Japanese politicians, saying they declared “non-freedom of expression.”

In a telephone interview with Yonhap News Agency, Kim said the statue is aimed at facilitating discussions with Japanese citizens about a long-standing grievance regarding the Korean victims.

“I think that Japanese politicians don’t want to look squarely at the truth,” Kim said, referring to the order to remove the statue.

The sex slaves are one of the most emotional issues that still remain unresolved between South Korea and Japan.

According to historians, up to 200,000 women, mostly Koreans, were coerced into sexual servitude at front-line Japanese brothels during the war when the Korean Peninsula was a Japanese colony. Those sex slaves were euphemistically called “comfort women.”

According to Korea Verband, a nonprofit association based in Berlin, its chairperson Han Jung-hwa donated a small statue of a girl to Ravensbruck Memorial, located in Brandenburg, northern Germany, in 2017.

The German museum, which was built to commemorate the largest concentration camp for women on German soil during World War II, has had the statue on exhibition since then.

But last year, the Japanese Embassy demanded the state government of Brandenburg and the memorial hall withdraw the bronze figurine from display.

“I heard that the Brandenburg government and the museum have been under pressure from Japan,” said Han, the head of Korea Verband.

The museum succumbed to the Japanese pressure and removed it, she said.

This is not the first time Japan has attempted to disturb local exhibitions of such statues in Germany.

The Japanese embassy in Germany protested to GEDOK, a Berlin museum for female artists, which decided to display a sculpture of the sex slave girl at its “Toys Are Us” exhibition starting from Friday.