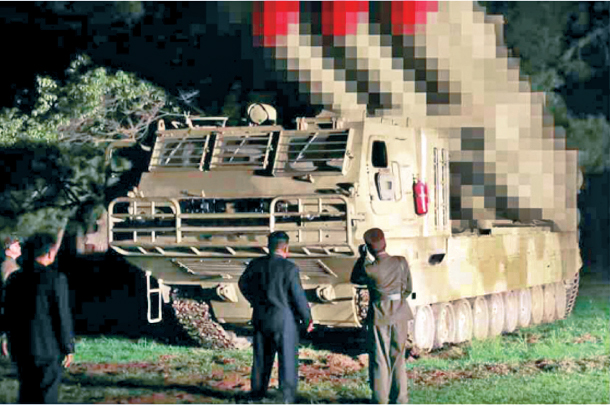 The North’s Korean Central News Agency (KCNA) said in an English report Saturday that the projectiles fired into the East Sea on Friday morning were aimed at examining “the altitude control flight performance, track control capability and rate of hits” of the “guided ordnance rocket.”

North Korean leader Kim Jong-un, who was said to have been present during the launch, expressed “great satisfaction” with the results of the test, saying that a domestically produced weapon “planned and so desired” by the ruling Workers’ Party has been made, according to the KCNA report.

The KCNA said that Kim had “guided again” the testing of the newly-developed large-caliber multiple launch guided rocket system, indicating it was not his first time observing the test.

The report did not specify when the leader first observed such a test, but it appears to have been last Wednesday.

On Thursday, the KCNA said in an English report that Kim observed the test-fire of a “newly-developed large-caliber multiple launch guided rocket system” the previous day, using the exact same words for describing the projectiles tested on Friday and reported by the KCNA on Saturday.

South Korea’s military called all four projectiles tested by the North on Wednesday and Friday apparent short-range ballistic missiles, meaning Seoul and Pyongyang contradicted each other twice last week. Two projectiles were tested on each day.

Seoul, however, has not backed down in either case, maintaining its original stance that the projectiles appeared to have been a new type of short-range ballistic missile, stressing the assessments were based on joint analysis by Seoul and Washington.

Seoul and Pyongyang are not the only ones contradicting each other.

While the Blue House condemned the North over both tests last week, U.S. President Donald Trump tweeted over the weekend that the recent “short range missiles” were “not a violation” of his agreement with Kim in Singapore at their summit in June 2018.

“These missiles tests are not a violation of our signed Singapore agreement, nor was there discussion of short range missiles when we shook hands,” Trump tweeted on Friday.

“There may be a United Nations violation, but Chairman Kim does not want to disappoint me with a violation of trust, there is far too much for North Korea to gain - the potential as a Country, under Kim Jong Un’s leadership, is unlimited. Also, there is too much to lose.”