We must live in peace

We must live in peace 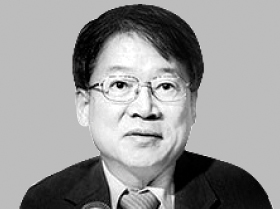 Huh Woo-sung
The author is a professor of Kyung Hee University and head of the nonviolence center.

After Japanese Prime Minister Shinzo Abe announced that his government would strip Korea of its status as a “trusted trade partner” for fast-track clearance on sensitive exports, President Moon Jae-in vowed to take corresponding actions. No one knows how far the two neighboring countries will push their diplomatic row. Rhetoric and actions from the two governments haven’t been so furious for years. The vehement outbursts and fury testify to the depth of hostility and resentment toward one another. To put it simply, enmity has reached its boiling point.

According to the teachings of Buddha, five aggregates make up a personality or a self — form, sensation, perception, mental activity and consciousness. The five functions should develop in line with the growth of the body and mind. Factors causing happiness and unhappiness increase as an individual ages. In the process, joy can develop into desire and unhappiness into resentment and anger. Buddha was a strong critic of excess in the five aggregates and called them “mara,” or destructive demons that must be closely examined and controlled.

Life cannot be without desires, hostilities or complaints. But we cannot live in disgruntlement or exile forever. Personal greed or sometimes outside or political influence dominates us. In this case, self-control is the only way to stop harming ourselves or others.

An overrun of collective emotions can be more dangerous than individual fury. The mass psyche stems from tribalism — an anti-intellectual form of collectivism. Neo-tribalism caused by a divide from political ideology or national identity escalates into collective fury and conflict has become rampant across the world.

Anti-Japanese sentiment also falls into this category. No Korean is born with ill feelings toward Japan. But it has become second nature to many Koreans through their culture, education and the media. Once the feeling settles in, it cannot be contained through mediation. Collective emotions mixed with fury can build up to violent behavior or even terrorist acts. 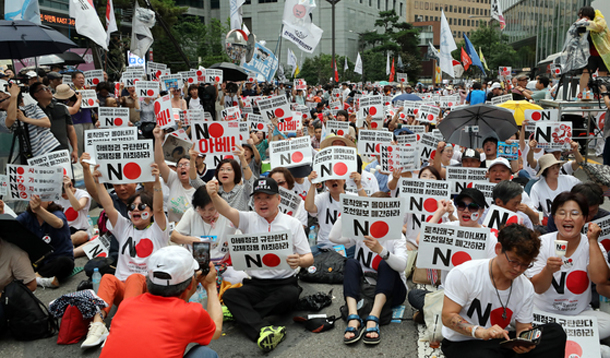 Members of a civic group called “Citizens in Action to Denounce Shinzo Abe” stage a rally in front of the Japanese Embassy in central Seoul on Saturday to criticize Japan’s economic retaliations against Korea. [NEWS1]

The latest gush of anti-Japanese sentiment has been triggered by Japan’s export restrictions on Korea in retaliation for the Korean Supreme Court’s rulings on wartime forced labor. Although the affair was initiated by a judiciary judgment and slack diplomacy, the Korean government and media have stirred up anti-Japanese sentiment. The public sector is hiding its irresponsibility and impotence with another form of arbitrariness.

Collective anti-Japanese sentiment should be contained. By doing so, we can benefit in two ways. First, anti-Korean animosity from Japan can be eased. At the current rate, Japanese people will surely bear hostility towards Koreans. In his “Book of Corrections,” Ryu Seong-ryong (1542-1607), who served as prime minister during Japan’s invasion of the Joseon Dynasty, pleaded with the country to avoid falling out with Japan.

The restraint of ill will toward a neighbor also will help reduce hatred and anger of our society. Korea is being bisected as voices for a diplomatic solution to improve ties with Japan are regarded as betraying the country and kowtowing to a former colonial predator. Under the dogma, Ryu of the Joseon Dynasty would be considered pro-Japan. But he stressed peacemaking with Japan after having witnessed the suffering and devastation of the Japanese attacks.

Cho Kuk, who recently stepped down as the president’s senior secretary for civil affairs, has brought up the “Bamboo Spear” song to remind the public of the Donhak Peasant Revolution in the 19th century and excite a grass-root rebellion against Japan. But the country’s free democracy and future could be at risk if a diplomatic misstep of resorting to anti-Japanese sentiment hurts alliances.

Society must check itself. Our society already brims with negativity. It can be unleashed in monstrous forms. We must contain our anger and instead exercise shrewdness to weather the challenge in our favor or for the betterment of the bilateral relationship.

As ruling Democratic Party Chairman Lee Hae-chan said, Japan is a neighbor we are stuck with. We must live in peace, whether we like it or not.