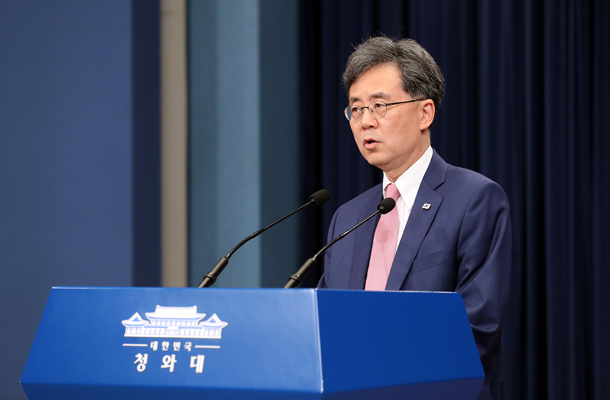 On Aug. 2, Kim Hyun-chong, the deputy director of the National Security Office, announces that Shinzo Abe government’s decision to remove Korea from the so-called white list of countries eligible for preferential treatment in trade is a violation of the principles of free trade Tokyo advocated at the G-20 Summit in Osaka, Japan. [JOINT PRESS CORPS]

HA HYUN-OCK
The author is a financial team editor of the JoongAng Ilbo.

“The Korean economy is like a cormorant in the Yangtze River. It is tied to Japanese parts and the material industry, so when it catches a fish, it brings it back to the master,” wrote Japanese economic commentator Naoki Komuro in his 1989 book “Collapse of Korea.”

In China, fishermen tie cormorant at the neck to prevent them from swallowing any fish. The “cormorant economy” refers to the vulnerability of Korea’s export structure. The outdated term came back after three decades. As Japan excluded Korea from its list of countries eligible for preferential treatment in trade, Blue House Deputy National Security Advisor Kim Hyun-chong stressed the importance of doing away with the cormorant economy.

Since the Bank of Korea started compiling related data in 1998, Korea’s trade with Japan has been in deficit for 21 consecutive years. Last year, its losses amounted to $24.2 billion with Japan while its trade with China resulted in $49.1 billion in surplus. Rather than calling it a “cormorant economy,” it is reasonable to view it as a choice according to relative dominance in the industrial division in Northeast Asia.

We should welcome the government’s declarations and determination to lower dependency on Japan. But problems arise when we get swept up by emotion and do not make a calm strategic decision.

“In the history of Korea-Japan relations, there are many examples of Korea making a sudden decision one day without understanding the other side, which then results in irreversible disasters. As Sun Tzu said, if you know the enemy and know yourself, you will never be in peril in a hundred battles. If you are ignorant both of your enemy and yourself, you are certain to be in peril in every battle,” according to the book written by Kim Hyun-chong, “On Korea-U.S. FTA.”

Ross Terrill, the author of “The New Chinese Empire,” wrote that setting a goal and having the power to achieve it were separate matters. The will that lacks ability is dangerous.