Dependence on Japan to be cut

Dependence on Japan to be cut 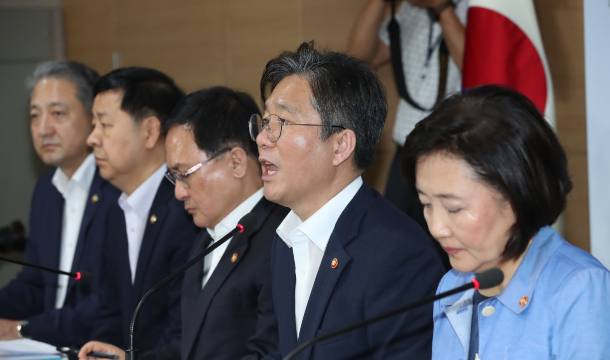 The government will invest nearly 8 trillion won ($6.6 billion) in research and development (R&D) of core industrial materials to wean Korea off its dependence on Japanese imports as the trade row between the two countries shows no signs of truce.

Minister of Trade, Industry and Energy Sung Yun-mo said Monday that the government will commit 7.8 trillion won over the next seven years in research to speed up local production of materials usually imported. Through the investment and additional support measures, the government seeks to establish by 2024 a stable supply of 100 key industrial materials affected by Japan’s new trade restrictions.

The announcement follows Japan’s decision last Friday to take Korea off its “white list” of preferential trade partners. The removal, to be implemented from Aug. 28, is expected to tighten exports of nearly 1,200 Japanese products to Korea. Seoul has fired back, saying that it will remove Tokyo from its own “white list,” although details have yet to be announced.

Industry Minister Sung described an initial goal of securing a stable supply of 20 industrial materials most impacted by Tokyo’s measures within one year, followed by a steady supply of 80 other materials over five years.

“The government has prepared special measures that cover financial and tax support and regulatory exemptions, which fully utilize the government’s resources,” announced Sung during a press briefing at the Central Government Complex in central Seoul.

The industry minister said the government will focus on support for companies to diversify supplies of the 20 materials through sources in the United States, China and the European Union.

It will inject 273.2 billion won this year into developing technologies for materials used in semiconductor, display and rechargeable battery production.

For the additional 80 materials, the government said it will offer over 2.5 trillion won through state-run banks to support mergers and acquisitions of overseas companies specializing in the affected materials.

The government also emphasized easing regulations to help local industries, such as reducing a 54-day period for safety tests on chemical material production to 30 days.

Last year, Korea had the largest trading deficit with Japan - $24.1 billion - among all its trading partners. According to the Trade Ministry, 68 percent of Korea’s imports from Japan last year consisted of industrial materials, components and equipment.

The Finance Ministry added Monday that it will inject 65 billion won by October into developing local materials and component technologies.

The National Tax Service announced separately that it will postpone tax audits for small- and medium-sized companies affected by Tokyo’s export restrictions as part of its efforts to support local industries in the growing trade row.

The Korea Venture Business Association, which represents local start-ups, said Monday that over 80 percent of start-up companies believe Japan’s trade restrictions will have a negative impact. Companies said that if the export restrictions continue, they would on average be able to weather supply shortages by six to eight months.

According to a report by NH Securities and Investment on Monday, Korea could see growth of only 1.8 percent this year if Tokyo’s export restrictions expand beyond semiconductors to the broader electronics industry.