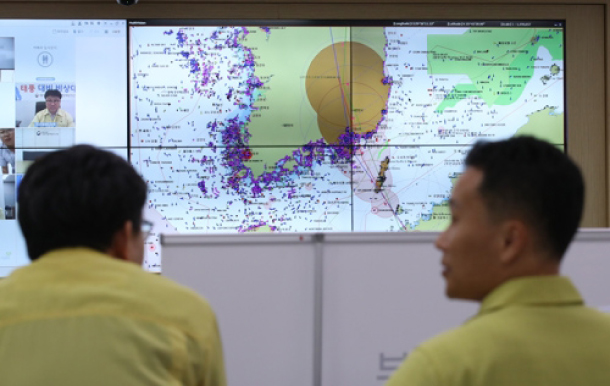 Officials from the Ministry of Oceans and Fisheries monitor Francisco in the situation room at the Sejong government complex Tuesday afternoon. [YONHAP]

Tropical storm Francisco was forecast to weaken after it landed near Busan Tuesday night and moved north through the peninsula, the Korea Meteorological Administration (KMA) said Tuesday.

“Francisco is moving northwest in the sea near Busan with a maximum wind speed of 20 meters per second [44.7 miles per hour],” the KMA said Tuesday afternoon. “It will land near Busan tonight and bring with it lots of rain and strong winds in the eastern coastal regions through Wednesday.

“It is expected to weaken into a tropical depression by Wednesday morning as it moves towards Andong, North Gyeongsang,” the KMA said. “But the forecast may change and we advise everyone to consult updated information over time.”

The KMA issued strong wind advisories in areas most likely to be affected by the storm. It said South Jeolla’s Yeosu, Goheung, Hwasun, Suncheon, Boseong and Gokseong counties would be affected by strong winds on Tuesday afternoon and that North Chungcheong and North Jeolla would come under the influence of strong winds by the night.

By early morning Wednesday, Ulleung and the Dokdo islets, North Gyeongsang and Gangwon are most likely to experience strong winds, it said.

Tropical storm Francisco first formed as a tropical depression east of the Mariana Islands in the western North Pacific Ocean on Thursday, developed into a tropical storm by Friday, and strengthened into a typhoon as it moved northwest toward Japan into Tuesday.

A tropical depression is defined as a low pressure area that is accompanied by thunderstorms with a maximum wind speed of 39 miles per hour or below, according to NASA. A tropical storm, NASA said, is similar but with maximum winds between 39 to 73 miles per hour.

A storm becomes a typhoon when its maximum wind speed exceeds 73 miles per hour.

Francisco’s maximum wind speed on Tuesday morning was about 85 miles per hour according to U.S. Joint Typhoon Warning Center.

But by the time Francisco crossed the Kyushu Islands on Tuesday, it had weakened into a tropical storm, with a maximum wind speed of 51 miles per hour.

The storm was forecast to have a maximum wind speed of 33.6 miles per hour by the time it approaches Andong on Wednesday morning.

In the meanwhile, a stronger storm called Typhoon Lekima was approaching Taiwan Tuesday afternoon. It was forecast to hit Taiwan by Friday with a maximum wind speed of 87 miles per hour and move towards Shanghai by Sunday.