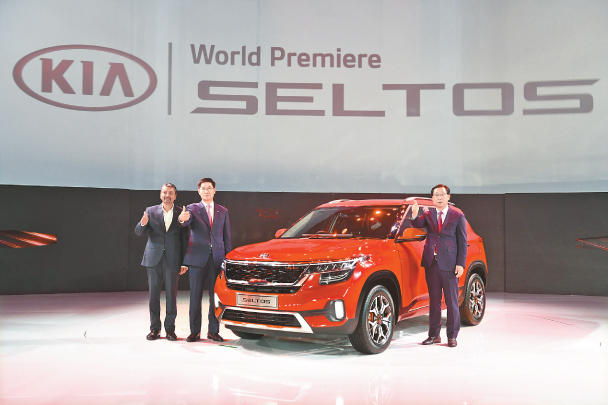 Representatives from Kia Motors and Kia Motors’ Indian subsidiary celebrating the introduction of the Seltos SUV at an event held in June in India. [KIA MOTORS]

Seltos is the first model to be produced at Kia’s Indian factory. The factory is still under construction, but several production lines have been completed for Seltos production. The factory, located in Anantapur, Andhra Pradesh, is scheduled to be completed in the fourth quarter and will have a production capacity of 300,000 cars per year.

Kia has made significant efforts over the past 13 months to customize Seltos for the Indian market, the automaker said in statement. The company hopes to expand its presence in the fast-growing market to make up for the losses it is suffering in other overseas markets, such as China.

While the compact SUV was introduced in Korea last month, it will roll out in India on Aug. 22.

The Korean company has been taking preorders for the model since July 16. As of Tuesday, 22,073 preorders have been placed, according to Kia.

The production target for this year is 52,000 units.

Kia Motor is discussing what model to add alongside Seltos from next year. The company said it will run the factory at full capacity within three years.

“As we believe success in the Indian market will become an important turning point for our global business growth, we are putting all our efforts into business in India,” a spokesperson from Kia Motors said.

To boost sales of Kia cars, the automaker is specially focusing on building a local dealer network. The company plans 265 dealerships and service centers in 160 Indian cities.