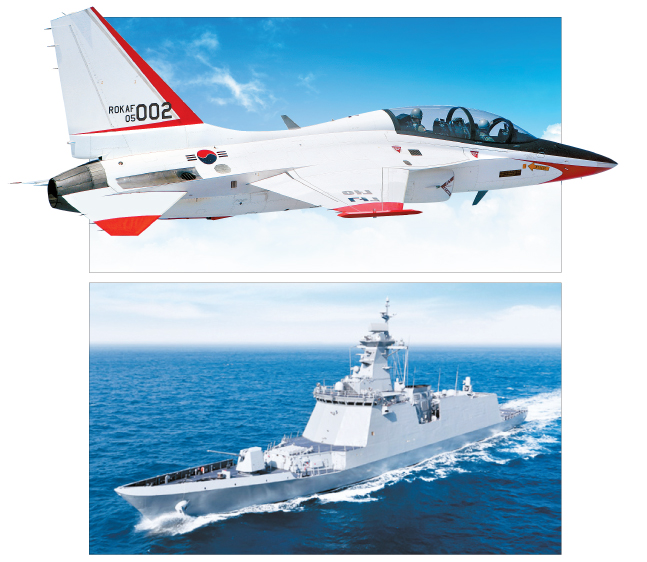 On the eve of the outbreak of the Korean War in 1950, South Korea’s military had a measly arsenal, largely made up of M1 carbine rifles and a few M3 howitzers given to it by the United States. The country only had 27 M8 light armored cars, a tiny force compared to the fleet of 242 T-34 Soviet tanks operated by the North Korean army at the time.

Yet over 60 years later, the South Korean military now possesses a formidable collection of 2,400 tanks, including the domestically produced K-1 and K-2 models, 2,300 self-propelled artillery pieces like the K-9 or K-55 and around 3,200 armored vehicles of various kinds, making it one of the most heavily armed militaries in the world.

This armored force, now mostly outfitted with domestically produced equipment, testifies to the fast growth of South Korea’s defense industry. Compared to 2006, when the country’s defense exports amounted to only $250 million, South Korea in 2017 exported $3.2 billion in arms and military equipment. According to the Stockholm International Peace Research Institute, or Sipri, South Korean arms makers increased their sales by a record 20.6 percent from 2015 to 2016, to total $8.4 billion.

The most popular of South Korea’s arms exports is the K-9 Thunder, a self-propelled 155-millimeter howitzer that was first developed by Samsung Techwin and the Agency for Defense Development, a government-run think tank, in 1999, based off the K-55 howitzer model, a variant of the U.S.-made M109. With a range of up to 40 kilometers (24.9 miles), the K-9 can be fired within 30 seconds after a launch order is given thanks to its fully automated ammunition resupply system.

The effectiveness of the weapon was testified by its export to Turkey, which paid $1.6 million in licensing fees per unit to produce 300 of these howitzers under the model name T-155 Firtina. In 2008, Poland, which faced difficulties developing its own howitzers, chose to import 120 K-9s at a price of $310 million. More recently in 2017, the K-9 beat out the Russian alternative, Msta-S, when India decided to buy 100 of the weapons for $646 million. This number could very likely increase in the near future, given that the Indian Army is predicted to need 250 self-propelled guns for its new strike corps.

That year, Finland also announced it would be buying 48 K-9 guns, and Estonia 12. Norway too signed an agreement to buy 24 K-9s for $215 million along with six K-10 automatic ammunition resupply vehicles that serve to support the K-9 system. Several other countries are also thinking about buying the system, with Egypt and Australia currently in negotiations with South Korea and the United Arab Emirates, Saudi Arabia, Romania and the United Kingdom also considering the choice, according to South Korea’s Defense Acquisition Program Administration (DAPA).

The popularity of the K-9 system may be primarily owed to its competitive price range. In a bid for weapons systems in Australia, the K-9 and its K-10 additions were priced at around 6 billion won ($4.9 million) per unit, but the German-made howitzer PZH2000 was priced at around 18 billion won. Yet in terms of performance, the PZH2000 is only slightly superior to the K-9 with regards to its range, rate of fire and ammunition load.

Also adding to the K-9’s advantages is the fact that it has already been proven in combat situations. The weapon saw action during the bombardment of Yeonpyeong Island by North Korea in November 2010, and its ability to successfully return fire while being shelled by North Korean artillery garnered much interest from abroad, leading to several exports.

These advantages also extend to other armored equipment that South Korea hopes to sell abroad. A product expected to succeed the K-9 in sales is the K-30 Biho, a short-range anti-aircraft gun. Equipped with a radar that can detect and track a target within a range of 17 kilometers and a dual-barreled 30-millimeter cannon that can fire up to 3 kilometers, the Biho was upgraded in 2014 to be integrated with four Shingung surface-to-air missiles with a range of 5 kilometers.

Last year, India decided to buy 104 Biho systems, along with 4,928 missiles and 170,000 rounds of ammunition at a price of 3 trillion won, choosing the weapon over the Russian-made Tunguska and Pantsir systems. Moscow, however, attempted to slam the brakes on the sale, putting pressure on India by virtue of its close military relationship with the country. According to a spokesperson for Hanwha, the maker of the Biho system, negotiations are still underway to finalize the sale.

Prospects also appear good for South Korea’s K-21, an infantry fighting vehicle, and the KM surface-to-air missile, also known as Cheongung or Cheolmae-2. Saudi Arabia is believed to have expressed interest in introducing Cheongung missiles to its military. With a range of 40 kilometers, the Cheongung, developed jointly by South Korean companies LIG Nex1, Hanwha Systems and Doosan DST, can shoot down enemy fighters and cruise missiles. The Cheongung-2, developed in 2015 as a modification to the original, may even be able to deter ballistic missiles.

Another cash cow for the South Korean defense industry is the export of aircraft and naval vessels, which, according to Ahn Sang-nam, a spokesman for the Korea Defense Industry Association, accounts for the greatest share of exports abroad for the industry at around 60 to 70 percent. 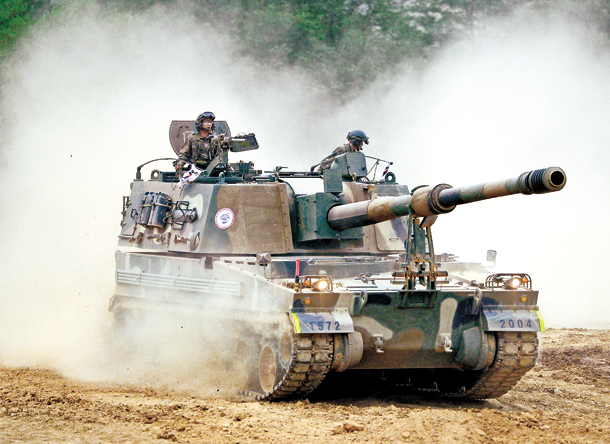 Countries like Thailand and Indonesia rely heavily on South Korean-made frigates and submarines to operate their fleet, while South Korean-built FA-50 fighter jets defend the skies over the Philippines and Iraq.

As a multirole fighter based off the Korea Aerospace Industries’ (KAI) T-50 Golden Eagle, the first supersonic trainer aircraft produced domestically by KAI, the FA-50 proved its effectiveness in the Philippines, which bought 12 of them in 2013 and used them to conduct air raids on rebels in its southern regions. Argentina reportedly plans to buy up to 10 FA-50s, which retail at around $30 million per unit.

South Korea’s advanced naval manufacturing sector also allows it to churn out a variety of warships that are in demand abroad. Thailand bought a 3,650 ton Daegu-class frigate last year at 52 billion won ? the biggest single arms purchase in the country’s history, which is set to serve as the flagship of its fleet. The Philippines also bought two 2,870 ton frigates for 37 billion won. Daewoo Shipbuilding & Marine Engineering, or DSME, one of South Korea’s leading shipbuilding firms, also built Norway’s largest warship.

South Korean made submarines also have a good reputation abroad, with the Chang Bogo-class submarines serving a key role in Indonesia’s maritime fleet. In 2011, Jakarta bought three of these vessels weighing in at 1,400 tons each and ordered three more last April from DSME at a price of 1.16 trillion won. These sales have made South Korea the fifth-largest submarine exporter in the world.

Ahn added that South Korea’s export of aircraft and ships rose significantly since DAPA, the country’s arms procurement agency, was established in 2006. Since then, the country’s technology in regards to these weapons developed to world class levels, he said, but that many variables exist in regard to continued sales.

In its study covering 2013 to 2017, Sipri classified South Korea as the 12th-largest arms exporter in the world, accounting for about 1.2 percent of all global arms sales. The country ranked even higher at 6th place in 2018, accounting for 3.8 percent.

Yet there are many challenges that lie ahead for South Korea’s arms makers. For one, they must compete toe-to-toe with much larger established producers in the United States, United Kingdom and the rest of Europe.

“We must look toward niche markets like those for armored equipment and short- to mid-range missiles while stressing our price competitiveness and avoiding markets like high performance aircraft, which are already dominated by the leading firms,” said Eom Hyo-sik, an executive at Hanwha Defense. “In the future, we will inevitably come into fierce competition with China.”

Western firms dominate the international market for cutting edge military aircraft, tanks and Aegis-equipped destroyers. South Korea, for its part, relies on countries like Indonesia, Iraq or the Philippines to buy its arms, yet more often than not, these countries do not have the purchasing power to make large buys, and the purchases they do make are frequently affected by domestic political developments.

According to Ahn Young-soo, chief of the Korea Institute for Industrial Economics and Trade’s defense and aerospace industry research division, sales of military naval vessels and aircraft dropped significantly since last year, and the defense industry is struggling to recover to its revenue levels from 2015 to 2016.

The range of client countries that South Korean firms can deal with is also limited. Strategic reasons prevent close transactions with countries from the former Communist bloc like China and Russia, while the West, like the United States and Europe, are already well supplied by their own arms makers, leaving only regions like Southeast Asia, the Middle East and South America.

The domestic environment too is far from sunny. Almost 85 percent of revenue for domestic arms makers comes from the South Korean government’s acquisitions, which amount to 15 trillion won yearly. Yet this reliance has created a structure where manufacturers are unwilling to expand their supply due to high unit costs.

Moreover, according to sources in the industry, companies and government officials are not keen to take on research and development tasks for new weapons, due to the slow nature of the research that can often lead to failure. “If development is slow, we often have to pay compensation for liquidated damages, while failure could result in an accusation of corruption,” said one source. “Who would work under these conditions?”

Ahn stressed, however, that South Korea possessed many advantages that makes it an ideal arms producer, and that politicians, government, military and private manufacturers all needed to coordinate to maximize the industry’s potential abroad.

The fact that the country is still at war, Ahn said, shows that its weapons have been verified on the battlefield. Testifying to this is the success of the K-9 in Europe, where importers understood its operational capacity due to its use in constant training and battle.

“The defense industry, due to its links to security, is a necessary industry to maintain,” Ahn said. “But once domestic needs are met, manufacturing equipment is often laid out of use, which is a loss for both private firms and the country as a whole.

“It is imperative to find a path forward through exports,” he added.