The trial of Koh Yu-jeong, the suspect in the grisly murder case which took place on Jeju Island in May, officially began at the Jeju District Court on Monday. 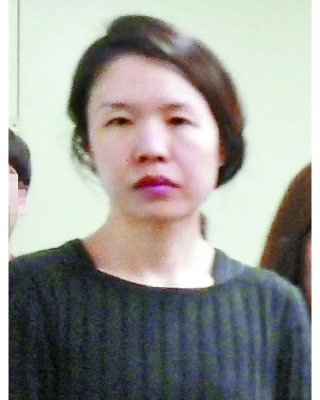 During her first court appearance, Koh continued to maintain her claim that she murdered her ex-husband because he tried to rape her.

“While the accused [Koh] was washing the dishes at the pension, the victim tried to get [Koh] to have sex with him,” Koh’s lawyer told the Jeju District Court on Monday morning.

“We have evidence on [Koh’s] body that shows she was trying hard not to get raped by him.”

It was the first time that Koh has been seen publicly since she was handed over to the prosecution by the police on June 12, and her appearance caused quite a commotion.

“It just makes me even angrier to see no sign of repentance on Koh’s part,” said a 56-year-old man, a resident of Jeju city, who attended the hearing.

“It made me sick to hear the statements,” said a 45-year-old man surnamed Lee, who also attended the hearing.

“They were even trying to use the little boy to their defense.”

Koh’s lawyer asked the court for a favorable handling of the case, “for the sake of the son who has to live on without a father.”

Koh, 36, is suspected of killing her ex-husband, a 36-year-old man surnamed Kang, at a pension in Jeju on May 25, dismembering his body and attempting to destroy the evidence by putting the body parts in plastic bags and throwing them into the sea.

Kang and Koh had one son together, who is now six years old. The couple divorced two years ago.

She was apprehended by police on June 1 after Kang’s family called the police saying they couldn’t reach him. Police arrested Koh after raiding her home in Cheongju, North Chungcheong, and finding objects that were believed to have been used in the murder.

Police also found zolpidem, a type of drug commonly used for the short-term treatment of sleeping problems, in Kang’s bloodstains at the pension.

Koh has admitted to killing her ex-husband and said she was alone in committing the crime, but she has claimed the murder was “accidental.”

Contrary to her claim, prosecution found that Koh had searched the words, “weight of bones,” “solidity of bones” and “lethal dose of nicotine,” online, using her phone and her home computer over a period of days around May 10.

“The accused searched those words because she wanted to find out how best to prepare bone soup for her [current] husband,” Koh’s lawyer told the court on Monday.

“As she was searching about the soup, those words were just part of phrases that popped up as related contents.”

The prosecution rebutted this claim by stating, “she typed those specific words [weight of bones, lethal dose of nicotine] in the search engine, and they were not related content as a result of other searches.”

Koh faced further turbulence as she left the court to return to the Jeju prison where she is being held. Upon her departure, a woman broke through the police line and grabbed her hair. Other onlookers ran toward Koh at this point, repeatedly shouting, “Murderer!”

Prison officials had to extricate Koh from the crowd before she could board a vehicle.

Koh’s next hearing will be held on Sept. 2.