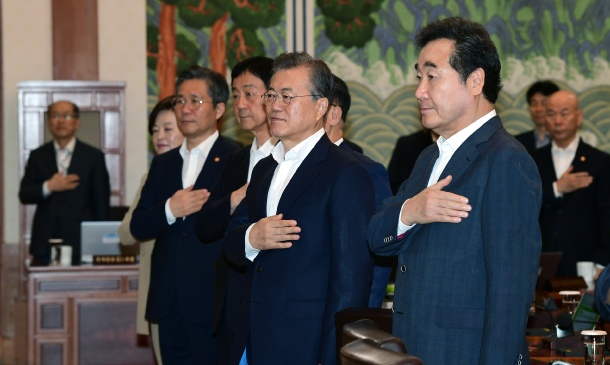 President Moon Jae-in, second from right, and Cabinet members salute the national flag at a meeting in the Blue House on Tuesday. [YONHAP]

President Moon Jae-in Tuesday stressed the importance of an aggressive fiscal policy to overcome the economic slump and asked his cabinet to deliver an expansive budget for next year.

“At this moment, the role of fiscal policy is extremely crucial,” Moon said in opening remarks at a cabinet meeting Tuesday morning. “The ministers must have thorough preparation to reflect the government’s policy intentions in the budget to not only counter the grave economic situation but also revitalize the economy.

“We are currently at the final stage of completing next year’s budget plan,” Moon continued, adding that fiscal policy is important to strengthen industrial competitiveness and counter the downside risks of the external environment.

The ruling Democratic Party (DP) and the government were discussing a plan to create the largest-ever budget bill for next year. Earlier in the morning, DP lawmakers had a consultation with Koo Yun-cheol, second vice minister of finance, to discuss the issue.

“In order to counter the economic crisis and support the innovative growth policy, we agreed to pursue a much more expansionary policy next year,” Rep. Youn Kwan-suk, deputy chief policymaker of the DP, told reporters after the meeting.

The Ministry of Economy and Finance has drafted a bill with a 6.2 percent increase over last year’s regular budget.

“The supplementary budget included an amount to support component and material industries to cope with the supply crisis triggered by Japan’s export regulations,” Youn said. “We agreed that a more aggressive amount will be reflected in next year’s budget.”

When the National Assembly passed the 5.83 trillion won supplementary budget bill earlier this month, 273.2 billion won was earmarked to counter the supply crisis.

DP lawmakers demanded a more aggressive fiscal policy to boost the economy ahead of next year’s general elections, a lawmaker told the JoongAng Ilbo. “The government explained that we need to maintain the 40 percent debt-to-GDP ratio, but we asked why,” he said. “Many demanded that the government must be more aggressive and bold.”

The Korean government’s debt-to-GDP ratio was 39.5 percent this year, and it is expected to exceed the 40-percent mark next year. Deputy Economic Prime Minister Hong Nam-ki had earlier said he will manage the ratio at the 40-percent level and the operational budget balance deficit against GDP within 3 percent.

The main opposition Liberty Korea Party (LKP) immediately criticized the plan. “We are disapproving of an expansionary fiscal policy,” Rep. Na Kyung-won, floor leader of the LKP, said Tuesday. “We will further deal with the wrongfully drawn-up budget.”

In his seven minutes of remarks, Moon did not criticize Japan over the ongoing diplomatic and trade spat.

“Amid the trade war between the United States and China, Japan’s economic retaliations were added, causing a hardship for our economy,” Moon said. “The government must have an urgent determination and counter the serious economic situations cool-headedly and warn against groundless fake news, false information and exaggerated forecasts that fuel the insecurity of the markets. They are not only inaccurate diagnoses but also harmful to our economy.”

He stressed that Korea’s economic fundamentals are sound, quoting global credit rating agencies’ recent reports. Moon said the government must keep its balance and use any challenges from outside as an opportunity to ensure internal stability of the economy and heighten industrial competitiveness.

“I want to especially stress that time won’t wait for us,” Moon said, urging the government to “speed up its decision-making and policy implementation.” He said ministries must improve their cooperation and execute policies to improve competitiveness, create new growth engines and support companies’ efforts.

He also said the government must implement other policies than just a strategy to counter Japan’s export controls, asking ministers to improve domestic consumption and boost investments, particularly spending for social infrastructures that concern the people’s everyday lives such as water and sewage management, gas and electricity. Moon also vowed to put more efforts into creating jobs for the elderly, the low-income class and youngsters.