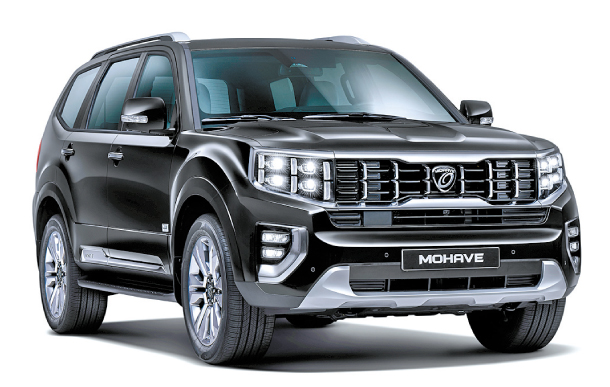 Kia Motors offered a glimpse of the exterior of its upgraded Mohave SUV ahead of the official release next month as the automaker continues its drive to stay competitive in the growing global SUV market.

The second face-lifted model, coming just three years after the first upgrade in 2016, borrows styling cues from the Mohave Masterpiece, a Kia Motors concept car introduced at the Seoul Motor Show in March.

The lineup was debuted in 2008 as the largest SUV from the Korean auto company.

Mohave The Master, to be offered in five color options, will have a larger grille compared to the previous version, vertical cubic daytime running lights and LED headlights to provide a sportier look. It is also going to be equipped with 20-inch wheels and a slimmer roof rack.

The unveiling of the new Mohave SUV is the latest effort by Kia Motors to bolster its SUV lineup.

The automaker recently started mass producing the Seltos compact SUV at its first India factory in following its vow to sell 110,000 of the vehicles to Indian consumers by the end of the year.

Kia Motors sold 383,000 units in North America in the first half, up 2.3 percent from 375,000 units a year earlier, backed by strong demand for the Telluride SUV and the Soul boxcar.