From cormorant to albatross

From cormorant to albatross 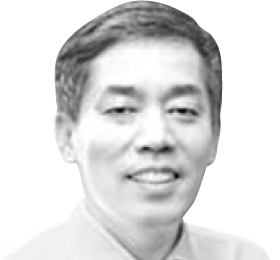 Kim Dong-yul
The author is president of the Korea Small Business Institute (KSBI).

Lately, a bird named the cormorant has been frequently mentioned in the media. Cormorant fishing is a tourist attraction in Gifu, a small city near Nagoya in Japan. The small hotel I stayed in near the Nagara River after visiting the Nagoya Expo and Toyota Motors was clean and filled up. At night, boats for sweetfish fishing using cormorants began. The 1,300-year-old traditional fishing method ties cormorants’ long necks in the middle to prevent the birds from swallowing the fish they catch.

Japan’s export curbs teach us that it is dangerous to rely on a certain country or company for parts and materials. It also gives us the insight that small yet strong Korean companies with competitive technology should be given chances to do business with large corporations. Also, the cost of diversifying supply channels should be calculated as an important risk management cost. In fact, risk management is the most crucial function and organization of global companies and leading financial institutions.

These are the conclusions of a small- and medium-sized enterprise conference that took place after the Aug. 5 countermeasures. Small and medium-sized enterprises with technologies should be able to use test beds necessary for materials and parts development more freely and at lower costs. There should be a revised certification system to improve and ensure reliability of developed materials and parts. Trusted materials and parts developed with investment of much time and resources require customers. In other words, stable supply and demand are important. Therefore, environment and system renewal is necessary to allow public agencies like the Defense Acquisition Program Administration (DAPA) and the Korea Electric Power Corporation (Kepco) to purchase their products preferentially. With records of doing business with public agencies, small and strong companies that develop materials and parts will be able to win contracts in the private sector. In the end, it’s all about globalization. Efforts should be made to host international expos to make Korea a new global supply base for materials and parts. These opinions should be heard.

The damage has yet to be felt. In a survey by the Korea Small Business Institute (KSBI) last week, only 6.2 percent — 262 of 4,254 companies responding to the survey — said they suffered problems already. But they will. The special act on parts and materials legislated in 2001 should be made into a permanent law, and the Materials and Parts Industry Promotion Agency, dissolved in 2009, should be revived as a public agency. As parts and materials development takes at least 10 years, basic science and technology also should be supported. A professional workforce needs to be trained, and research and development programs should have mid- and long-term plans. As materials and parts development takes a long time, related policies should be promoted extensively. It is not desirable for the policies from the Kim Dae-jung and Roh Moo-hyun administrations to change in the succeeding administrations. 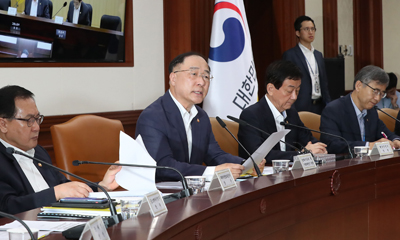 Deputy Prime Minister for the Economy Hong Nam-ki makes remarks in a meeting with economy-related ministers on Aug. 5 to deal with Japan’s export restrictions. [WOO SANG-JO]

One of the factors behind Germany’s successful reunification was a consistency of policies. The grand principles of the Ostpolitik, “change through rapprochement” and “small steps,” were maintained regardless of administration changes. Hopefully, the grand frame of the Aug. 5 measures to enhance materials and parts’ competitiveness should last for at least 20 years. The Korean government, small businesses and large corporations, research institutions, colleges and public agencies should pursue efforts for localization through cooperation and mutual support. Only then can the Korean economy evolve from a cormorant relying on others to a pelican that help others, and then to an albatross that flies farthest.

Heavy is the head with Korea’s crown