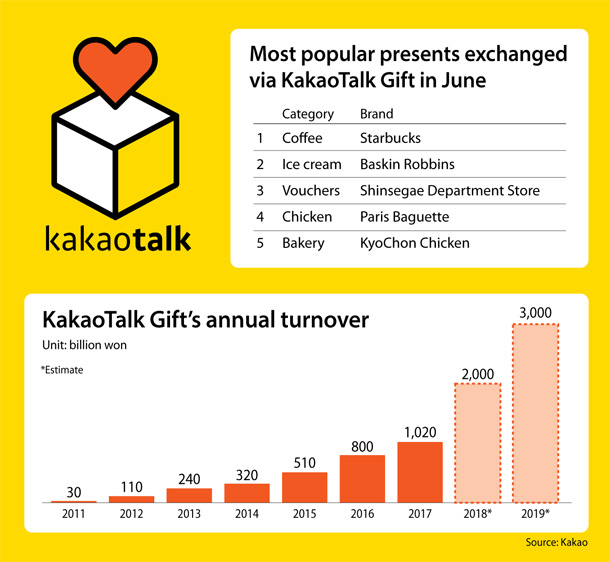 There is a gift shop where no presents are present.

Despite having a total of zero floor space, this store has been visited by more than 17 million Koreans so far. On average, 10 billion won ($8.24 million) of gifts are purchased each day. The business is estimated to generate revenue of 3 trillion won this year.

It’s KakaoTalk Gift, an e-commerce platform where users can purchase gifts and gift coupons and send them via the KakaoTalk messenger app.

Korea’s e-commerce leader is Coupang. Last year, the company sold around 4.42 trillion won worth of goods but remained in the red with an operating loss of 1.09 trillion won. The situation’s not much different for other e-commerce players in the country, like TMON and WeMakePrice - revenues are increasing, but none of them are in the black.

In the past, gifting was perceived as an activity for close friends and lovers. It entailed a cumbersome process, making visits to brick-and-mortar stores, picking the right item and taking the time to wrap it. There was also a perception regarding the price: a gift that costs around 3,000 to 4,000 won was too cheap for a decent present. 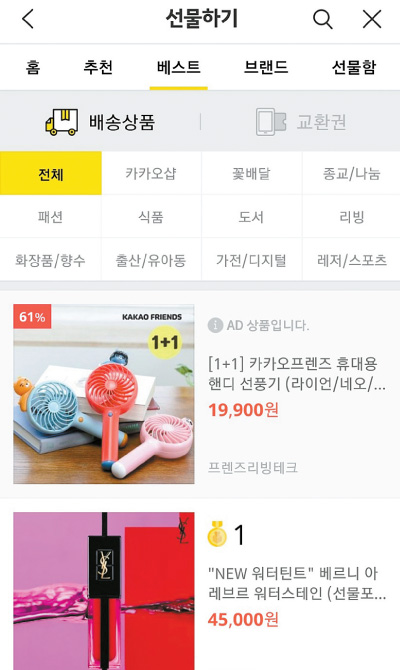 “People receiving gifts through KakaoTalk’s ‘Friends with Birthdays’ led to even more users buying gifts,” he added. “We’re seeing an increase of both users and purchase volume.”

Holidays like Valentine’s Day, which falls on Feb. 14, or Lunar New Year Day are peak times for the service. Sales on this year’s Valentine’s Day quickly broke the 10 billion won milestone. More than one million units of Pepero, a chocolate stick snack, were sold on Nov. 11 last year through the messenger app’s gift shop. That day is celebrated as Pepero Day in Korea, when couples exchange the stick snack as gifts.

Monday 9 a.m is when KakaoTalk Gift user numbers hit the weekly peak. This is the time when office workers check the messenger app’s Friends with Birthdays section, which shows a list of KakaoTalk friends with upcoming birthdays.

The most popular price range was between 5,000 won and 10,000 won. By gift type, best sellers in order of preference were coffee, ice cream, vouchers, chicken and bakery items. Lately, perfume and clothes are climbing up the rankings.

By brand, Starbucks is the undisputable leader. Its sales were higher than any of the other partners. It is followed by Baskin Robbins, Shinsegae Department Store, Paris Baguette and Kyochon Chicken.

Among Kakao Friends goods, the mini dehumidifier, the wireless hand fan and cushions embroidered with the characters sold well.

The popularity of KakaoTalk Gifts is largely a function of KakaoTalk, the messenger app used by almost every Korean regardless of age and status.

But the service has its own success drivers as well. One is the hidden “nudges” that make gifting an easier job for the users.

The “Friends with Birthdays” section was added in May last year. Since the section appears at the very top of the app’s friends list, KakaoTalk users are able to keep track of friend and family birthdays. This knowledge has driven more gift purchases.

The Gift mobile page makes selection less of a burden. The app offers a list of recommended gifts according to the occasion - whether it’s for birthdays or wedding anniversaries. There are themed lists as well. For example, the health supplement category offers red ginseng products or vitamins. The KakaoTalk Gift service is a major retail channel for smaller-sized domestic brands. Via K Studio, a company that sells house decoration items, generated 55 percent of its annual sales in 2017 from KakaoTalk Gift. Marymond, a young brand for bags and clothes, even has products exclusively sold on KakaoTalk Gift, despite supplying goods to brick-and-mortar stores and through an official website.

“Starting from August, we will expand the types of products to include globally renowned brands to offer a wider variety of products to our users,” said KakaoTalk CEO Yeo Min-soo.