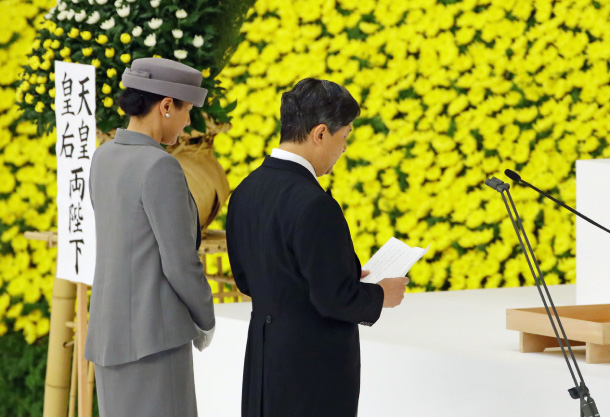 Japanese Emperor Naruhito and Empress Masako partake in a ceremony commemorating the war dead at Nippon Budokan Hall in Tokyo on Thursday. [YONHAP]

Japan’s new emperor, Naruhito, echoed his father’s words in expressing “deep remorse” for Japan’s wartime past on Thursday during his first address at an annual memorial ceremony for the nation’s fallen lives in World War II.

Japanese Prime Minister Shinzo Abe, on the other hand, did not acknowledge Tokyo’s wartime responsibility as in the past, though he vowed to maintain peace.

“Our country today enjoys peace and prosperity, thanks to the ceaseless efforts made by the people of Japan,” the Japanese emperor said, according to English transcripts provided by Japan’s Imperial Household Agency. “When I look back on the arduous steps taken by the people, I cannot help but be overcome with deep emotion.”

Naruhito continued, “Looking back on the long period of post-war peace, reflecting on our past and bearing in mind the feelings of deep remorse, I earnestly hope that the ravages of war will never again be repeated.”

The emperor added he would pray for world peace and for the continuing development of Japan. Naruhito’s speech on Thursday came as a relief for Seoul, who feared the new Japanese emperor may not follow in his father’s footsteps and voice remorse for Japan’s wartime atrocities, especially at a time when Seoul-Tokyo ties are straining amid Abe’s attempts to whitewash Japan’s brutal colonial rule over the Korean Peninsula.

As Japan was holding its annual ceremony for the war dead on Thursday, the anniversary of Japan’s World War II surrender, Korea was celebrating its liberation from Japan and holding anti-Abe rallies across the nation denouncing the Japanese prime minister for imposing export restrictions against Seoul, apparently in retaliation for Korean Supreme Court rulings ordering two Japanese companies to compensate Korean wartime forced laborers.

Abe on Thursday sent a ritual offering to the controversial Yasukuni Shrine but refrained from visiting in person.

The last time Abe personally went to the Yasukuni Shrine was in December 2013. The Japanese prime minister has since sent ritual offerings during the shrine’s spring and autumn festivals as well as on Aug. 15.

Visits to the shrine by high-profile Japanese figures have often raised the ire of Korea and China, victims of Japan’s wartime aggression, because among its honorees are Class-A war criminals.

Tomomi Inada, Tokyo’s former defense minister, made Abe’s ritual donation on his behalf Thursday, saying the offering was made under the name Shinzo Abe, but didn’t mention his titles of prime minister or president of the ruling Democratic Party, the Japan Times reported.