Culture clash, but best of both worlds in Mini

Culture clash, but best of both worlds in Mini 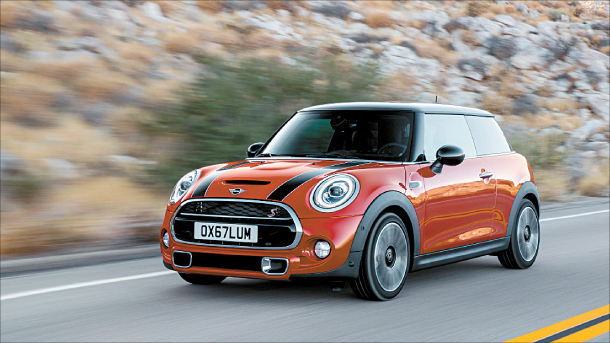 GAPYEONG, Gyeonggi - It’s hard to tell whether they shrunk a BMW or just bulked up a Mini.

Whatever they did, they seemed to get the combination right in the new Mini Cooper Hightrim. The German automaker has managed to maintain enough of the footprint and tradition while getting the toad-like boxcar to perform more like a BMW.

The first Mini rolled off the lines in Britain in 1959, but the brand has been owned by BMW since 1994. It’s a strange collision of styles and corporate cultures that raises a lot of questions off the bat.

It’s true that the Mini-series simply does not have the obvious elegance and the outward appearance of BMW branded models. My expectations were low as I approached what is one of the smallest cars on the road today. 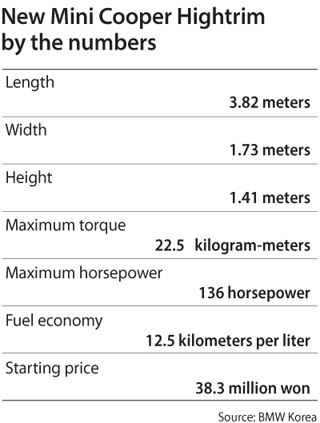 But after getting behind the wheel of the Hightrim version of the Mini Cooper last week, it was obvious that looks can indeed be deceiving.

While the vehicle is only 3,821 millimeters (150 inches) long, 1,727 millimeters wide and 1,414 millimeters high, the Mini Cooper was hiding explosive on-the-road performance that surprised me on a 120 kilometer-drive from Yongsan District, central Seoul, to Gapyeong, Gyeonggi.

The compact size concerned me at first, as I was never a big fan of riding in anything small, but it was pleasuring to see how BMW designed the vehicle, staying true the traditional lines on the exterior and making the interior downright futuristic.

Heritage accents were evident from stem to stern on the two-door hatchback, from the signature oval headlamps to the deceptive rectangularity.

After spending around 10 minutes examining the exterior of the Mini Cooper, it was time for me to step in and shift into drive. When I opened the door, an oval of light appeared on the asphalt. Nice touch.

The interior was tight, but the designed made the most of the space. The carbon-hued seat locked me in and made me feel comfortable, while an array of switches gave me a sense of control. It was like being in the cockpit of a small airplane.

Circular digital dials indicated speed, fuel levels and distance traveled, old meeting new right there on the dash. A leather steering-wheel suggested both tradition and performance at the same time.

“I can assure you that the Mini Cooper Hightrim is luxurious,” a BMW spokesperson said shortly before I hopped in the hatchback for a drive. “Driving will be excellent for you as well.”

It wasn’t. At first.

I already knew that the Mini Cooper Hightrim wouldn’t be the most comfortable vehicle ever given its size. For this reporter, who stands 5 feet 6 inches and wears a medium-sized T-shirt, the driver’s seat felt a little too tight to make turns comfortably on the highway.

Yet once I adjusted, I could definitely feel the powerful on-the-road performance from the Mini Cooper that I did not dare expect at first. Changing lanes, pulling U-turns and whipping around tight corners on the roads following Bukhan River was easy and comfortable.

With a 2.0 liter (122 cubic inches) four-cylinder gasoline engine, the little hatchback can generate 136 horsepower and 22.5 kilogram-meters in torque. The vehicle can safely hit speeds up to 210 kilometers per hour without a shudder or warning drivers that it might flip over. It only takes 7.8 seconds for this small beast to reach 100 kilometers per hour.

The infotainment system was a little problematic. Although a BMW Korea employee set the routes in advance of my test drive, the navigation system often got lost and started directing me to different roads. It even asked me to make two U-turns, only to put me on the exact spot 10 minutes later.

The two-door hatchback also failed to counter the less-than-positive reputations of infotainment systems in foreign cars, as its software was rather unresponsive. Selecting menus and making amendments came with a few seconds of lag.

While touchscreen feature was included in the 6.5-inch central display, it was not very useful, as typing in addresses had to be done with a separate wheel control near the gear shift.

If you plan to hop into the Mini Cooper for a destination never before visited, I advise you to prepare 10 extra minutes in advance so you have time to type in the address successfully.

The Mini Cooper Hightrim seems to be a promising option for those looking for a compact vehicle, as the hatchback comes with a unique design and solid on-the-road performance.

Size may be a problem, and not up-to-date digital gadgets could be another issue, but who’s quibbling when the car manages a successful nod to the past while incorporating enough of the future.