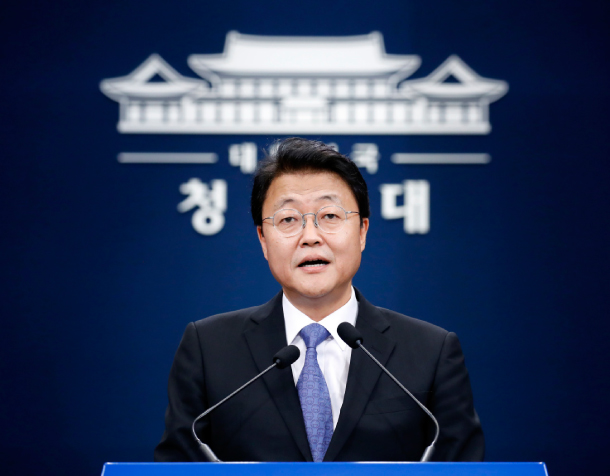 Joo Hyung-chul, economic adviser to President Moon Jae-in, details the administration’s plans for the upcoming Korea-Asean special summit in Busan in November at a press briefing at the Blue House on Sunday. [YONHAP]

With 100 days to go until the Korea-Asean special summit in Busan, the Blue House on Sunday called for the expansion of trade with Asean states, especially in light of the global rise of protectionist policies and trade wars, not to mention Korea’s recent tensions with Japan.

“An open and free trade system will be one of the topics of discussion at the special summit,” said Joo Hyung-chul, economic adviser to President Moon Jae-in and chair of the Presidential Committee on the New Southern Policy, in a press briefing at the Blue House on Sunday. “In such a time as this, when the [Shinzo] Abe government is conducting retaliatory trade policies, it is the position of the Korean government to open discussions about the issue […] and discuss the importance of open and free trade.”

The summit, hosted for the third time in Korea, will be held in Busan from Nov. 25 to 26. Moon will host a welcome dinner on Nov. 25 and the summit meeting on the morning of Nov. 26, which will be followed in the afternoon by a press conference. Bilateral summits are expected to be held on the sidelines.

“We will come up with specific measures to expand the bilateral free trade agreements (FTAs) with the member states of Asean,” Joo said. “Korea is currently working on exporting more of our companies to Asean member states to work on infrastructure projects such as smart city development, smart transportation and water resource management, as well as in bridging cooperation in the manufacturing and new industries sector.”

Joo added that the summit will also seek Asean support for peaceful relations with North Korea and for Moon’s project to bridge economic ties with the North.

“Korea will seek in-depth cooperation with Asean regarding the peace process on the Korean Peninsula,” he said. “And it will also seek Asean’s support and cooperation on the peace-economy of the peninsula.”

“Peace-economy” is a term coined by the Moon government - a vision proposed by Moon that peace can be promoted through inter-Korean economic projects, though the administration has not explained how it would conduct the projects without violating UN sanctions.

In response to a reporter’s question on whether North Korean leader Kim Jong-un would be invited to the summit, Joo said, “that depends on how the North-U.S. relations pan out.”

This year marks the 30th anniversary of Korea’s diplomatic ties with Asean.

“The special summit has been organized to commemorate 30 years of relations between Korea and Asean,” he said. “We will assess our relations of the past and come up with a vision for our relations for the next 30 years […] The summit will also highlight the achievements of the New Southern Policy and speed up the timeline for some of our projects planned in the policy.”

The Blue House said that next year it will announce detailed plans to upgrade the New Southern Policy, initially announced by the Moon administration in 2017 as a policy to deepen ties with the Southeast Asian region.

Korea hosted the Korea-Asean summit for the first time in 2009 in Jeju and for the second time in 2014 in Busan. By counting all the summits between Korea and Asean member states, this year’s summit will be the 21st.

The more recent summit was held in Singapore last year, during which Moon proposed hosting the special summit in Korea in 2019 to commemorate the 30th anniversary of Korea-Asean relations.

“Korea is the only country to have hosted a special summit with Asean for the third time in its own nation,” Joo said. “It goes to show Asean’s trust and support for Korea’s will to cooperate with Asean.

“The summit will also be the largest international conference hosted by the Moon administration. We expect over 10,000 people to take part in the summit and over 20 auxiliary meetings to be held before and after the summit.”

The summit will be followed by the first Korea-Mekong summit with the leaders of Vietnam, Cambodia, Laos, Myanmar and Thailand.

“The foundation for the Mekong summit was set when the foreign ministers of the region and Korea met up in 2011,” Joo said. “That meeting has been upgraded this year to the presidential level.

“The Mekong region has strong economic potential, as it is rich in natural resources and has a young working population. It is our intention to establish Korean-style cooperative industrial complexes in the region to export our SMEs to the area and expand cooperation on infrastructure and ICT sectors.”