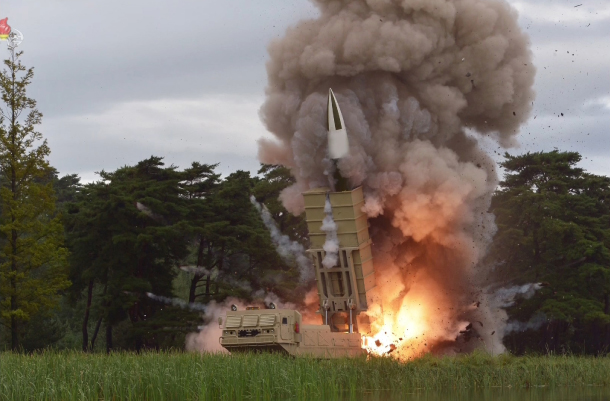 What appears to be a short-range ballistic missile is fired from a transporter erector launcher in this photo, released by North Korea’s state media on Saturday. Pyongyang said it tested a “new weapon” on Friday morning. [YONHAP]

High-level military officials from North Korea and China met in Beijing last Friday and agreed to develop their ties as denuclearization talks between Pyongyang and Washington are deadlocked.

Kim led a military delegation to Beijing earlier that day.

“Kim Su Gil expressed the will to develop the friendly and cooperative relations between the armies of the DPRK and China onto a higher level in conformity with the lofty intentions of the top leaders of the two countries,” the KCNA report read, referring to the North by the initials of its formal name, the Democratic People’s Republic of Korea.

Neither KCNA nor China’s state-run Xinhua News Agency reported on a meeting between Xi and the North Korean military delegation as of press time Sunday. 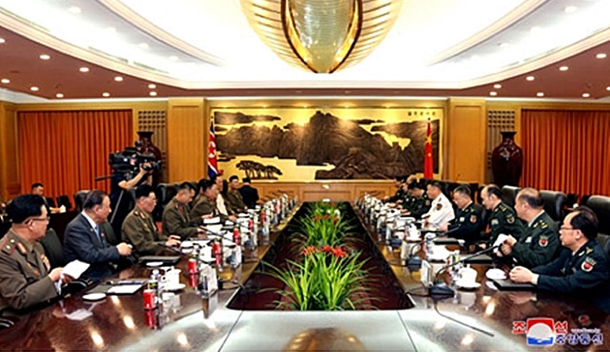 Park Byung-kwang, a researcher at the Institute for National Security Strategy in Seoul, said that the military meeting was a sign that the two allies were resuming exchanges in an area where interaction has been nearly dormant since Kim Jong-un rose to power in late 2011 following his father’s death.

“We’d have to wait and see if it’s a sign that China will ensure the North it will offer security guarantees in safeguarding its regime,” Park said. “If North Korea and China resume their combined military exercises or sharing of weapons, then relations between South Korea and China and the United States and China will likely worsen.”

The military meeting came nearly two months after Xi and Kim Jong-un last met for a summit, when Xi traveled to Pyongyang for a two-day state visit in late June. Kim said at the time that he was willing to “stay patient” in denuclearization talks with the United States but blamed Washington for negotiations failing so far, according to Xinhua.

Pyongyang reiterated that accusation on Saturday, saying via KCNA that Washington’s ongoing combined military exercise with Seoul was an “open denial” of the joint statement it signed with the regime on June 13, 2018 in Singapore.

“This is an open denial and an outright challenge to the historic DPRK-U.S. joint statement in which commitments were made to establish new DPRK-U.S. relations and build a lasting and durable peace-keeping mechanism on the Korean Peninsula,” an English version of the KCNA report read.

The North accused Washington and Seoul of rehearsing for “stifling [the North] by force of arms,” stressing that the United States should “keep in mind that our repeated warnings are not hot air.” In a separate report Saturday, KCNA said Kim guided the latest test-fire of a “new weapon” on Friday morning and expressed great satisfaction. Pyongyang fired a pair of unidentified projectiles into the East Sea last Friday, apparently short-range ballistic missiles.