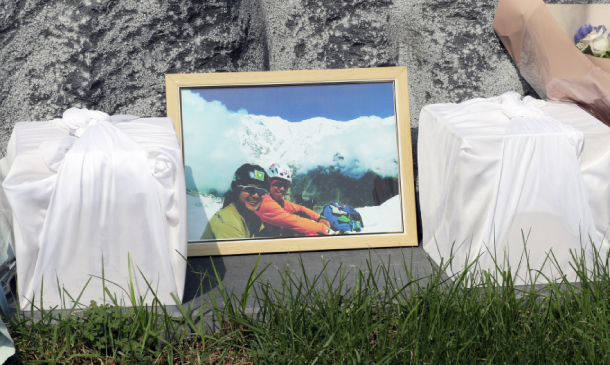 A photo of Park Jong-seong, left, and Min Jun-young, right, taken during one of their climbs in the Himalayas, and their ashes displayed at a monument at a museum in Cheongju, North Chungcheong, on Saturday during a memorial ceremony dedicated to the two. The men were lost in 2009, and their remains were returned to Korea on Saturday. [YONHAP]

The remains of two Korean climbers lost attempting a new route on Annapurna in the Himalayas almost a decade ago have returned home.

“We are thankful that they could return home finally after 10 years,” said Park Yeon-soo, who headed the nine-member team in 2009, on Sunday. “Min and Park were climbers who knew how to focus on the process more than the results.”

After failing to establish communication with the two, the team began a search on Sept. 27, but the efforts were unsuccessful. They had to call off the search after 10 days and return to Korea. A funeral for the climbers was held Oct. 11. A memorial was dedicated to them at base camp in 2013.

On July 23 of this year, two bodies were found by a local herdsman near the northern ridge of Hiunchuli Peak about 320 meters from the last known location of Min and Park. The bodies were linked by a rope.

Nepali authorities found objects from Korea with the remains and notified the team of the discovery on Aug. 8. Relatives of the two climbers and fellow mountaineers went to Nepal on Aug. 12 and identified the remains.

Min and Park were cremated in Kathmandu, Nepal, on Thursday, and their ashes were brought back to Korea on Saturday.

“Authorities suspect that Min and Park fell while climbing up a cliff while relying on the rope,” Park said.

“It must have been a lonely time for them for these past 10 years in the Himalayas,” Park added. “Now they can return home and rest.”

Min’s and Park’s relatives held a memorial ceremony at a museum in Cheongju, North Chungcheong, on Saturday.

“We are thankful to everyone who helped us come together after all these years of waiting,” said Park Jong-hoon, older brother of Park Jong-seong, at the ceremony.

“It was a very long hike, one that took 10 years,” said Min Kyu-hyoung, younger brother of Min Jun-young. “My older brother is home at last. It’s a miracle.”

The Jikji expedition team was formed in 2006 by a group of mountain rescuers from North Chungcheong. Their main goal was to raise awareness of the book “Jikji,” which was published in 1377 and is considered to be the first book made using moveable type (predating the Gutenberg Bible by 78 years).

The team achieved the first ascent of a Himalayan 6,235-meter summit in 2008 and named the mountain Jikji Peak, the only peak in the range with a Korean name.

“Our hikers Min Jun-young and Park Jong-seong have returned home,” Moon wrote on Facebook. “For the past 10 years, we could not let them go in our hearts.”

“The two were members of the team who wished to let the world know about Jikji metal-type book, and the people of Korea are proud of their spirit of adventure,” he wrote. “There are still around 100 Korean hikers who have not returned from the Himalayas. We will always be waiting and wishing for their return.”