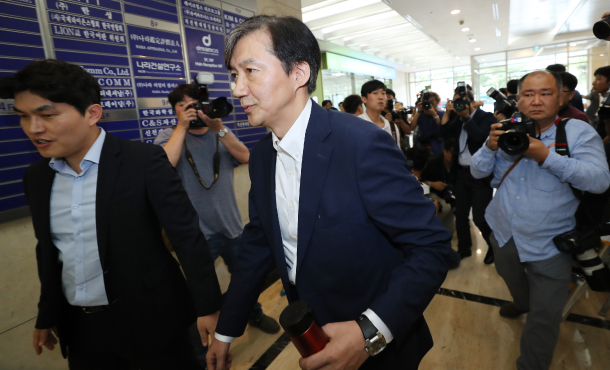 With photographers and reporters tagging along, Cho Kuk, center, justice minister nominee, walks into an office building in Jongno District, central Seoul, Monday morning, where he is preparing for a confirmation hearing at the National Assembly. [YONHAP]

Justice Minister nominee Cho Kuk is facing snowballing corruption allegations involving his family and their complicated wealth management. In addition, questions are being asked about his daughter winning a scholarship despite flunking grades and a suspected fake divorce by his brother to evade repayment of debt.

Cho, named by President Moon Jae-in earlier this month to head the Ministry of Justice, remained tight-lipped as of Monday about growing demands by opposition politicians that he abandon the nomination. “I will explain everything if the National Assembly holds a confirmation hearing anytime,” he said in the morning.

Admitting he was aware of allegations reported by the media, Cho said they are “far different from substantial truths.” He said he wants the public to pay the same attention to his vision and proposed policies if he becomes justice minister that it does to the allegations.

Cho, a professor of law at Seoul National University, is one of the closest associates of Moon. He served as senior presidential secretary for civil affairs until July and was then nominated to head the Ministry of Justice. One of his duties in that job would be to complete Moon’s reform of the law enforcement authorities including the prosecution.

He will have to undergo a non-binding confirmation hearing at the National Assembly before a formal appointment, although the ruling and opposition parties failed to agree on a date. By law, the president doesn’t need endorsement from the legislature to appoint a minister, meaning Moon can go ahead and appoint Cho even without the blessing of the main opposition Liberty Korea Party (LKP).

One of the newest allegations that surfaced Monday involved Cho’s 28-year-old daughter. According to the Pusan National University’s Graduate School of Medicine, Cho’s daughter received scholarships for six consecutive semesters from 2016 till 2018 after entering the school in 2015. While she received a total of 12 million won ($9,917) over three years, other recipients - mostly students from low-income families - only got scholarships for a single semester.

According to the university, Cho’s daughter entered the program in 2015 but flunked the first semester in 2015 and the second semester in 2018. She continued to receive the scholarships anyway.

The school said a professor established the scholarship in 2013 in remembrance of his father. Since its launch, seven students including Cho’s daughter were selected as recipients. While other students each received a one-time payment of up to 1.5 million won, Cho’s daughter was awarded 2 million won for each of the six consecutive semesters.

The six other recipients were recommended by the school, but Cho’s daughter was hand-picked by the scholarship fund. “She was selected because the professor was her mentor,” a school official told the JoongAng Ilbo on Monday. “After she flunked the first semester, she was about to give up, so the professor gave her the scholarship to cheer her up.”

LKP Rep. Kwak Sang-do said she virtually robbed other students of the opportunity of getting the scholarships. He also questioned whether the professor involved was named to the prestigious post heading the Busan Medical Center this year because Cho pulled strings as a powerful presidential aide.

The JoongAng Ilbo called the professor for a comment, but he did not answer the calls.

The LKP also accused Cho and his family of having attempted to avoid paying debt they inherited from his deceased father while protecting the family money through complicated lawsuits. LKP Rep. Joo Kwang-deok said Cho’s younger brother even carried out a fake divorce to protect the wealth.

Cho’s father was head of a private school foundation, Ungdong School, and owner of a construction firm, Goryeo Construction Company. In 1996, the school awarded a construction deal worth 1.6 billion won to the company. Goryeo City Development, headed by Cho’s younger brother, was later signed as a subcontractor.

Both firms, however, went bankrupt in 1997 before receiving payment from Ungdong School. The two firms took out bank loans, worth 950 million won, for the project, and the Korea Technology Finance Corporation (KTFC) ended up paying the banks.

The credit guarantee provider later sued for reimbursement from Goryeo Construction Company and seven joint guarantors of the loans and won the suit in 2001. Cho’s parents and younger brother were among the joint guarantors ordered to pay the KTFC, but they did not do so.

The KTFC filed another suit in 2011, as the reimbursement order’s 10-year mandate was about to expire. It won again, and the reimbursement amount grew to 4 billion won to include interest. It still failed to collect the money.

A mysterious investment by Cho and his family was also raised by the LKP. Cho’s wife and two children agreed in July 2017 to invest a combined amount of nearly 7.5 billion won in a private equity fund, which was larger than the family’s reported wealth of roughly 5.6 billion won.

The trio ended up investing only 1.5 billion won in the end, but opposition lawmakers are wondering how they were planning to invest more than what they were worth and whether it was appropriate for a high-level government official’s family to make such a big investment right after getting appointed to the Blue House.

“Instead of carrying out a witch hunt, we must hold a confirmation hearing as soon as possible and show the people who Cho Kuk really is,” said Rep. Song Ki-hun.

The DP lawmakers on the Legislation and Judiciary Committee, where the confirmation hearing will take place, said they will defend Cho from the opposition lawmakers’ scrutiny once the session is held.

The DP is still concerned about the snowballing accusations. Rep. Par Chan-dae, a spokesman of the DP, admitted on Sunday that some allegations do suggest things about the candidate that may fail to meet ordinary people’s expectations.

“Whether there was an illegality or not, a nominee must apologize first if his past had caused suspicion,” a senior lawmaker of the DP told the JoongAng Ilbo on Monday.