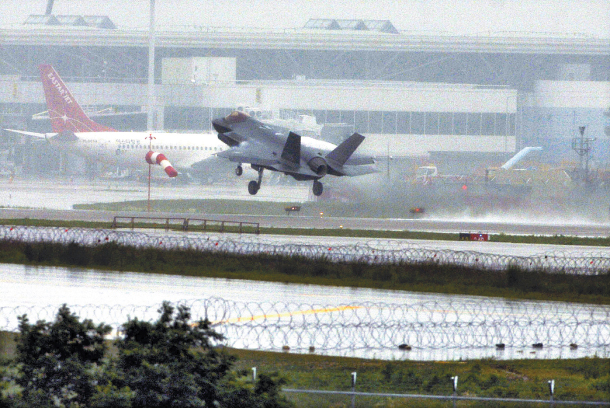 An F-35A stealth fighter jet from the United States arrives at an air base in Cheongju, North Chungcheong, on July 15. South Korea is set to receive four more F-35A fighter jets this week. [YONHAP]

South Korea is set to receive four F-35A fighter jets it bought from the United States this week, yet officials are keeping their deployment top secret to avoid antagonizing North Korea.

The four F-35As set to arrive in Korea within this week are the latest additions to the South Korean Air Force’s fleet of stealth fighter jets. In September 2014, South Korea and the United States signed an agreement that allowed Seoul to buy a total of 40 F-35As from U.S. defense contractor Lockheed Martin for a price of around $6.8 billion.

According to one source in the Korean defense industry, who asked not to be named, the jets arrived at a U.S. air base in Hawaii on Saturday and will likely be delivered to South Korea by this Thursday if weather conditions are fair.

The addition of this week’s deliveries puts the number of South Korean F-35As at eight, with two more coming in November and three in December. That will bring the total to 13 such jets by the end of this year. The remaining 27 jets are expected to be delivered by 2021.

Yet the South Korean military is keeping the latest deliveries a secret. One official said the military has established the principle of keeping all information regarding F-35As “highly classified.”

It’s unusual for the military to adopt such a hush-hush approach towards new weapons that will serve a crucial role in South Korea’s so-called Kill Chain pre-emptive strike program, one of the three central strategies devised to counter the military threat from North Korea.

Able to evade radar and equipped with a host of highly precise weapons like the AIM-120 air-to-air missile, the F-35As are a major component of Seoul’s ability to defend itself.

But the government in Seoul wants to avoid provoking Pyongyang amid tensions that have been ratcheted up as a result of the North’s protests over Seoul’s joint military drills with the United States.

Those exercises are set to end today, which could encourage the North to end its series of rocket tests over the last month. The deployment of the jets has the potential to put more pressure on relations.

In a visceral and aggressive statement released by one of its inter-Korean agencies, Pyongyang last Thursday slammed South Korean President Moon Jae-in for threatening peace on the peninsula with the joint drills and Seoul’s deployment of two new F-35As on July 15.

Last month, North Korea released a statement saying it would respond to Seoul’s new jets by testing and developing new weapons to destroy them. Following through on that threat, Pyongyang tested what is believed to be three new varieties of weapons in six different tests from July 25 to Friday. For its part, Seoul too has worked to strengthen its military defense, announcing a five-year plan last week that called for an additional 20 trillion won ($16.5 billion) in spending to beef up its military, particularly missile defense systems.

Yet the deployment of the F-35As has remained a sensitive topic for South Korea. In March 2018, when it imported the first of the jets, the commissioning ceremony was unusually quiet, attended by only the deputy chief of its air force. It was speculated that Seoul deliberately chose a low profile for its new jets to avoid throwing cold water on the Moon’s first summit with North Korean leader Kim Jong-un that April.