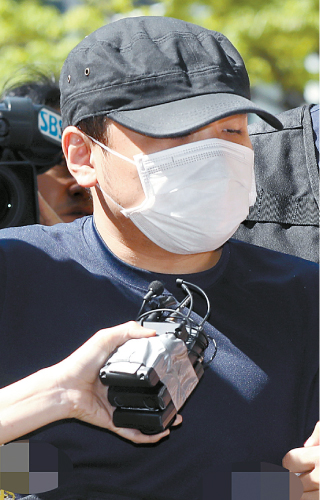 The murder suspect is taken to the Goyang branch of Uijeongbu District Court on Sunday for a detention warrant review hearing. [NEWS1]

The National Police Agency opened an internal inspection after a suspected murderer was turned away last week when he voluntarily arrived at the agency in central Seoul to confess his crime.

The 39-year-old man, Jang Dae-ho, walked into the agency on Saturday to confess that he had killed a man, dismembered his body and abandoned the body parts in the Han River earlier this month, but a police officer allegedly told him to “go confess at the Jongno Police Precinct.”

Fortunately Jang chose not to rethink his decision to hand himself in and took a cab to the precinct, located around 1.13 kilometers (0.7 miles) from the police agency.

But the incident has raised serious questions about protocol. It came to light after the National Police Agency released a statement to reporters covering the murder case that revealed Jang initially showed up to confess at the agency.

“When we asked him what he is here for, he just said he is here to confess and would not share the details other than that he wants to speak to a detective,” a police officer, who was at the reception desk of the National Police Agency on Saturday, told the JoongAng Ilbo. “So we told him to go report himself at the civil service center of Jongno Police Precinct.”

“There is no protocol for officers on night duty to deal with confessions,” another police officer of the National Police Agency told the JoongAng Ilbo.

“There is a code of conduct related to a situation like this, and it is only right for the officer who first receives the report of a confession to take care of the matter immediately,” Min said during a meeting of the Public Administration and Security Committee of the National Assembly on Tuesday. “We will be inspecting the officers responsible for violating the code of conduct, and we will see if there have been similar violations of the code of conduct throughout the country.”

The National Police Agency said it opened an internal inspection into the officers who had turned Jang away to Jongno Police Precinct.

Jang repeated his request at the Jongno Police Precinct and made his confession to an on-duty detective. He was immediately transported to Goyang Police Precinct in Gyeonggi, which had been investigating the case since body parts were found in the river. He was arrested and has been detained since then.

Jang told police he was an employee of a motel in Guro District, western Seoul, when he killed a 32-year-old man who was a guest on Aug. 8 after they had an argument.

“We had an argument, and the guest refused to pay for the accommodation,” he told police. “And he was rude in his speech. So I killed him in a fit of anger.”

Jang told police he used the motel’s master key to get into the guest’s room while the guest was sleeping, killed him with a weapon and placed the body in his own room for a few days.

He said he dismembered the body and on Aug. 12 biked to the Han River and abandoned the body parts in the river at different locations.

Police first found the torso of the victim near Magok Bridge in Goyang, Gyeonggi, on Aug. 12.

A part of the victim’s right arm was then found wrapped in a black plastic bag near the southern end of Haengju Bridge in Gangseo District, western Seoul, on Friday.

Police said they found what they suspect is the victim’s head on Saturday morning, a few hours after the suspect made his confession.

The Gyeonggi Bukbu Provincial Police Agency in a meeting on Tuesday decided to reveal the identity of the suspect ? his name, face and age ? given the gravity of his alleged crime.

Jang was issued a detention warrant after a hearing at a local court in Goyang on Sunday.

Right after the hearing, Jang was asked by the press on whether he had any final statements to make to the public. “The last words I have [for the victim] are that I will kill you again in next life if you act like that again,” he said.