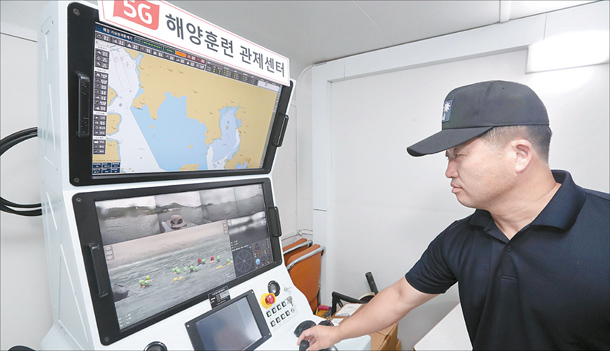 A staff on Thursday monitors naval cadets’ swimming under a combat scenario using data collected by smart watches that the cadets are wearing. Data is transferred on KT’s network. [KT]

KT inked a partnership with the Korea Naval Academy for the use of the 5G network in the training of naval cadets, the company said Thursday.

Utilizing 5G, wearable devices will be used to track the health conditions of cadets during training, autonomous cars will serve the naval base and 5G-connected unmanned boats will be developed.

On Thursday, the cadets demonstrated the use of smart watches while swimming in a combat scenario. The training requires cadets to stay in a line and swim to and from an island roughly 5 kilometers (3.1 miles) away. While about 50 life guards usually follow the cadets to make sure they are safe, it was not easy for the guards to monitor each cadet’s health status.

The smart watches made it easier for the academy to monitor heart rate, swimming style and position, KT said. Monitored data is shared real-time on the high-speed and low-latency 5G network.

A 5G-based unmanned surface boat was introduced Thursday as well. The vehicle can be controlled remotely through the 5G network. It will be used in emergency situations at sea. KT said it is the world’s first unmanned boat connected to 5G.

In the future, the carrier plans to develop cadet training programs using virtual reality (VR) and augmented reality (AR) technologies to make the naval academy a smart campus connected with the 5G network.