‘Japan’s action is designed to prevent Korea from rising’

‘Japan’s action is designed to prevent Korea from rising’ 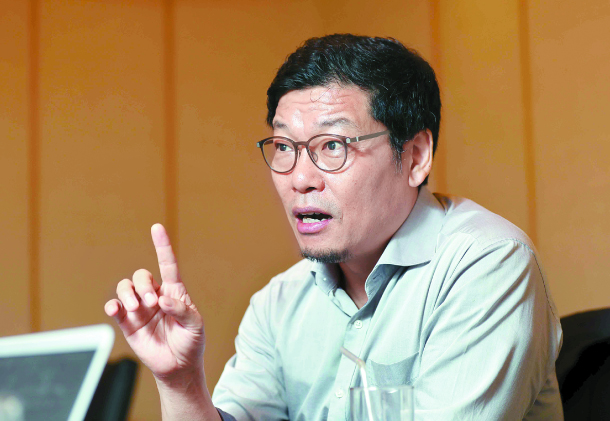 Lee Jeong-dong, Special Adviser to the President on Economy and Science [KIM SANG-SEON]

There is a person whose ideas come true one by one. In all the policies recently announced by the government, traces of his arguments are discovered. Those arguments include the need to revive manufacturing businesses and alternatives to strengthen competitiveness in fields including materials, components and equipment. A few days after the JoongAng Ilbo met him, the government announced what he had mentioned during the interview.

Lee Jeong-dong, currently a professor at the department of industrial engineering at Seoul National University, is the person in question. He became the special adviser to the president on economy and science at the beginning of this year. Impressed by his book “The Road of Accumulations,” President Moon Jae-in presented it to all of his employees. In the book, Lee argues the need to innovate the manufacturing business. When the government was about to start a renaissance in the manufacturing industry by accepting his notion, Japan started to take revenge on the Korean economy.

The JoongAng Ilbo met Lee Jeong-dong to listen to how he perceives the current situation between Korean and Japan. Throughout the interview, he emphasized that Japan’s action is intended to prevent Korea from rising higher. He drew an analogy between the U.S.-Japan semiconductor war and Japan’s economic retaliation against Korea. He said the problem is that Korean industries are evolving slower than before. To overcome this situation, he argued that the government should revitalize the industry by raising as much as 100 trillion won ($82.7 billion).

Q. Japan attacked the weak point of Korea’s industry, so now, the Japanese government is in control of key materials supplied to Korea.

A. This is a typical fight for hegemony to attain technology. The proof is that Japan targeted our future industries like non-memory chips and hydrogen vehicles. It reminds me of the semiconductor war between the United States and Japan in the mid-1980s. (At that time, as U.S. semiconductor companies were outweighed by Japan, the United States levied a retaliatory tax and pressured Japan, arguing that it violated intellectual property rights.) It is hard to say, but Japan’s intention is to suppress Korea before our technology develops even more rapidly.

China’s technology is developing at a rapid pace as well. Can Japan achieve its goal by preventing Korea from rising?

China and Korea are related to two different fields. When China came up by letting Huawei lead in the 5G network market, the United States started holding China back. Japan is trying to defeat Korea in the sectors including sensors and system semiconductors.

Was the strategy to conduct international division of labor with Japan wrong in the first place?

There is no country that does it all — from alpha to omega. Having an international division of labor with Japan was the best choice we could make when we could not think about Japan’s change in attitude. However, the situation has changed. We have to coordinate the division structure again.

Many worry whether we will be able to overcome this situation.

Now everybody in Korea is aware how the chemical compound hydrofluoric acid is used. In the past, many talked about the importance of components, materials and technologies, but there was not a time when everybody in Korea understood it. This is an instance of good out of evil. Probably, Japan might be most afraid of this.

Conglomerates can find other entities that supply materials and components by any means. What about small- and medium-sized companies? How will they survive?

That is not true. New industries are not built in a day. Existing industries evolve to become a new industry. IBM became a consulting company by gradually changing from a hardware company. The fact that Monsanto became a bio company from a seed company is the same. By introducing a novel technology, the existing industry evolves. Yet, the pace at which our industry evolves has become slower.

I think it is because of the Goldilocks economy, an ideal economic state neither too hot nor too cold. When the economy had to evolve, a warm environment was created to the point where evolvement was unnecessary. In the past, we used to look at advanced companies and jumped in the market when we thought we could do a little better. The important thing was how fast we could surpass them. We did it well. However, as our size grew, we had to change.

We needed to create a challenging demand, product and service that even advanced countries had not tried. However, when we had to do it, the existing business environment was too good. The exchange rate was good, and we had a large market called China next to us. We were in a Goldilocks economy. As we enjoyed that state, the speed to evolve became slower. Meanwhile, our specialty which was catching up our competitors was adopted by China.

Who creates challenging demand and how is it made?

First of all, it is conglomerates. When a large company suggests a new idea to a mid-sized company and material company and asks whether they could create the things they planned, the mid-sized companies develop it all night long. Then a supply chain is formed in Korea.

You also emphasized the role of the government that creates demand for innovation through media interview.

The size of the funds raised by the government exceeds 100 trillion won a year. If the government orders a challenging and innovative product and service, the whole industry will wake up. Taxes should be used like that.