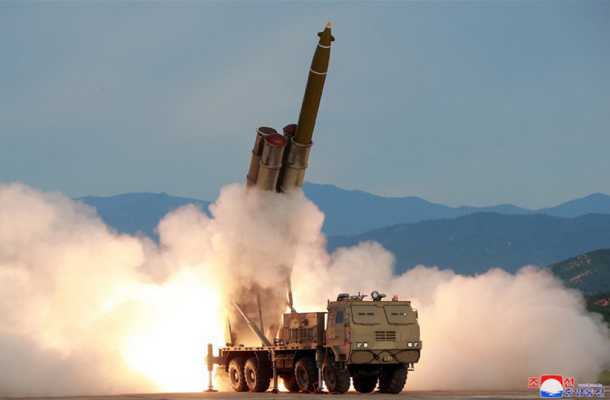 The rockets, which Seoul’s Joint Chiefs of Staff (JCS) said appeared to be short-range ballistic missiles, were launched early Saturday morning at 6:45 a.m. and 7:02 a.m. from an area near Sondok, South Hamgyong Province into the East Sea. Each flew a distance of approximately 380 kilometers (236 miles) with a peak altitude of 97 kilometers at over Mach 6.5, the JCS said.

The provocation is the ninth time Pyongyang has conducted a weapons test this year - and the seventh in the span of a month - taking place amid a lengthening stalemate in the country’s dialogue with Washington.

Pyongyang’s official Korean Central News Agency (KCNA) on Sunday said the test was personally guided by North Korean leader Kim Jong-un, who stressed the need to “step up the development of Korean-style strategic and tactical weapons for resolutely frustrating the ever-mounting military threats and pressure offensive of hostile forces.”

This mention of hostile military threats is likely referring to this month’s combined command post exercise between South Korea and the United States, which the North protested with a string of rocket launches. The drills, however, ended last Tuesday, though Seoul’s deployment of two new F-35A stealth fighter jets last week induced further ire from Pyongyang.

In a letter delivered to U.S. President Donald Trump earlier this month, Kim had apparently made a “small apology” for testing short-range missiles and said this “testing would stop when the exercises end,” according to Trump. That assurance, along with Kim’s other pledge to restart working level talks on denuclearization that he made to Trump at their surprise meeting in Panmunjom on June 30, appears to have fallen by the wayside with Saturday’s launch.

Yet Trump remained positive about his policy of engagement with the North on Saturday even after learning of its latest test. Telling the Associated Press that Kim has been “pretty straight” with him, the president added that the North Korean leader “likes testing missiles, but we never restricted short-range missiles.”

“Many nations test those missiles,” Trump added, according to a White House transcript.

So far, the weapons tested and paraded by state media appeared to include a domestic variant of the Russian-made Iskander missile, called KN-23 by the United States and South Korea, and another indigenous version of the U.S. Army Tactical Missile System, or Atacms. The multiple rocket launcher the regime said it had tested on Saturday could be similar to the artillery rocket system from earlier tests on July 31 and Aug. 2, though the newest projectiles had a much longer range and peak altitudes.

“Each Juche weapon developed and completed by us reflects the greatness of the Workers’ Party of Korea which provided powerful war deterrents capable of firmly defending Korean-style socialism,” the KCNA’s English-language report read.

Analysts say Pyongyang has been using the South and U.S.’s joint drills as an excuse to bolster its conventional weaponry before kicking off another round of dialogue over its nuclear program.

On Friday, North Korean Foreign Minister Ri Yong-ho issued a statement in which he said Pyongyang was ready for both dialogue or a standoff, and that Washington better drop its “confrontational stand” as the North remains its biggest threat.

Ri also slammed his counterpart U.S. Secretary of State Mike Pompeo as the “diehard toxin of U.S. diplomacy,” accusing him of dampening the mood for talks by saying the “toughest sanctions” would remain in place against Pyongyang before its denuclearization in a media interview last week.

The North’s critical statement was released when the top U.S. nuclear envoy, Special Representative Stephen Biegun, was in Seoul for discussions with South Korea over the process.

According to diplomatic sources, Biegun tried to contact Pyongyang to hold unofficial talks while in Korea, but was met with silence from the North.

These signs suggest Pyongyang is pining for a shift in Washington’s strategy for denuclearization talks.