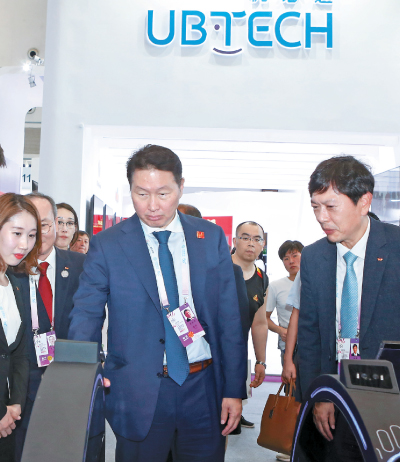 During his speech at the expo’s opening ceremony on Monday, Chey emphasized that innovation through smart technology can create social value and increase sustainability of businesses.

The SK head suggested the Chongqing government focus on improving the environment in the future, on top of developing smart technologies. Chey had emphasized during a recent meeting with SK Group executives that the latest digital technologies should be used to make environmentally-friendly energy solutions.

Chey added that to generate social value, values have to be measurable.

“To make a social value measuring tool, we are researching by forming a global consultative body and also cooperating with China’s State-owned Assets Supervision and Administration Commission of the State Council,” he said.

After the speech, Chey looked around the booths set up at the expo looking for partnership opportunities. Through the four-day expo, Chey will have meetings with Chongqing officials including Communist Party Secretary of Chongqing Chen Min’er to discuss how SK can expand partnerships with the city based on smart technologies.

SK said Chongqing is one of the group’s major business bases in China. SK Group’s major affiliate SK Hynix established its chip plant in Chongqing in 2014 and is in the process of constructing a second plant to be completed by the end of this year.

The annual expo, held for the second year, is jointly organized by the Chongqing city government as well as the People’s Republic of China’s Ministry of Science and Technology, Ministry of Industry and Information Technology and other related authorities.