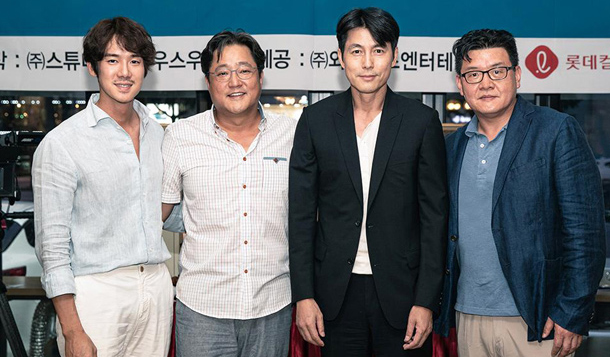 Director Yang Woo-seok of hit films “The Attorney” (2013) and “Steel Rain” will be working with the actors as well.

“Steel Rain” was based on the web comic “Steel Rain 2 Full Story,” written by Yang in 2017. The story of the web comic centered on a hypothetical diplomatic situation where a coup d’etat has been carried out in North Korea, forcing its leader and his most trusted agent to take refuge in the South.

“Summit: Steel Rain” expands on the first film by setting the story in another hypothetical diplomatic situation in which the leaders of three countries - the United States, North and South Korea - are gathered in a summit when they are kidnapped by forces in North Korea. The film’s script is based on the upcoming “Summit: Steel Rain 3” web comic, which is expected to be released on Sept. 23.

In “Steel Rain” Jung played an elite Northern soldier while Kwak portrayed the presidential secretary of South Korea. However, Jung and Kwak’s roles have changed for the spinoff. In this film, Jung will be playing the president of South Korea while Kwak will play an elite North Korean soldier and the leader of the rebellion. Lotte Entertainment revealed that the cast started shooting the film on Tuesday.